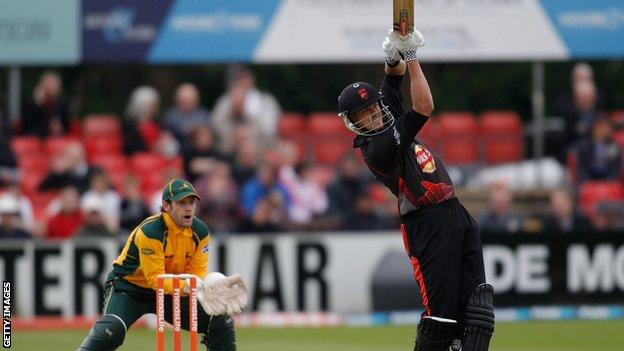 Lancashire have signed Leicestershire all-rounder Wayne White, who has agreed a three-year contract at Old Trafford.

The 27-year-old is their third new arrival ahead of the 2013 season.

Former Australia opener Simon Katich and ex-England paceman Kabir Ali have also joined the Red Rose, who were relegated to Division Two of the County Championship in September.

White began his career at Derbyshire, making his first-class debut in 2005, before moving to Grace Road in 2009.

"I am excited at the prospect of challenging for trophies in all three formats," he told the club website.

I have enjoyed my time with Leicestershire, and it will be a wrench to leave, but I am looking forward to a new, exciting chapter in my career with Lancashire

"Playing at Old Trafford is something I am really looking forward to.

"Working with Peter Moores and his staff is a great opportunity for me and I am excited by his plans for the playing squad.

"I have enjoyed my time with Leicestershire, and it will be a wrench to leave, but I am looking forward to a new, exciting chapter in my career with Lancashire and to be part of a successful playing squad."

Lancashire coach Moores added: "Wayne is a rapidly emerging cricketer, whose passion to improve and win trophies will match that of the rest of the squad.

"He will give us the depth we need to compete in all three competitions and create healthy competition within the squad for a position in the first team."

"It came as a bit of a shock to us," he said. "We had discussions with Wayne at the end of the season and he said he felt he needed opportunities elsewhere and wasn't committed to the club.

"He was moving forward as a player and we saw him as a part of what we were doing, but obviously he's made the decision that he wants to further his career elsewhere. I only want players here that are committed to Leicestershire."