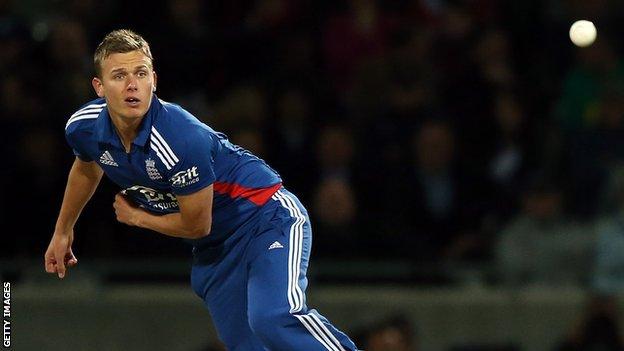 England spinner Danny Briggs has been ruled out for the rest of their winter tour with a sprained ankle.

The Hampshire left-armer, 21, suffered the injury during a fitness session.

He will miss Sunday's fifth and final one-day international against India - the hosts lead the series 3-1 - as well as the Twenty20 series in New Zealand.

Yorkshire batsman and part-time spin bowler Joe Root will replace him in the squad to face New Zealand, the England and Wales Cricket Board has confirmed.

Briggs was the only member of the one-day squad not to have played a single match during the India tour, but had been in contention to feature on Sunday.

He will also miss the England Lions' tour of Australia next month.

Root's promotion means he will be part of all three England squads for the New Zealand tour, which starts on 9 February in Auckland with the first of three Twenty20 matches.

The 22-year-old was named in the Test squad ahead of Eoin Morgan and Samit Patel on Thursday, as well as being a late addition to the one-day group.

An England and Wales Cricket Board spokesman said: "Danny Briggs has been ruled out of the current one-day series, the New Zealand Twenty20s and the Lions tour with a right ankle sprain sustained during a fitness session.

"Joe Root will replace Briggs in the Twenty20 squad in New Zealand."