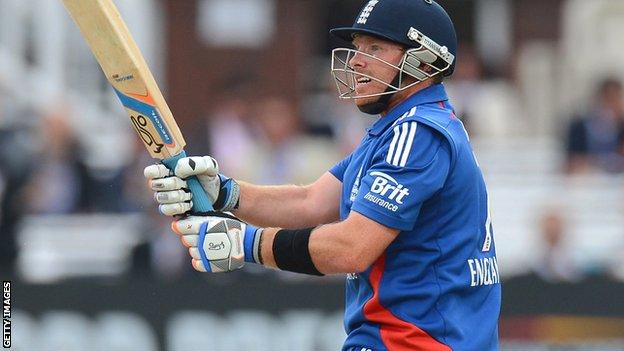 Ian Bell struck an unbeaten 113 as England sealed a seven-wicket victory in the final one-day international, India winning the series 3-2.

In the first international played at Dharamsala, Tim Bresnan (4-45) twice struck in successive balls as India were 226 all out having been put in.

Suresh Raina (83), dropped on five and 61, made his fourth consecutive fifty.

But Bell shared in three 50 stands and hit his first overseas ODI hundred as England won with 16 balls remaining.

"Dharamsala proved to be very generous hosts as they provided England with a seaming wicket that they were only too happy to exploit. Tim Bresnan's elbow injury didn't prevent him taking four wickets, but Steven Finn and James Tredwell were again the pick of the bowlers.

"Ian Bell rode his luck in the opening overs but a perfectly paced century consolidated his spot at the top of the order, and Eoin Morgan also finished the series in style with a run-a-ball 40. England can draw positives from the series, but weaknesses remain when confronted with more typical Indian conditions."

Cold early morning conditions proved more to England's liking when Alastair Cook won the toss for the first time since the opening match, which the tourists won by nine runs.

The entire playing area was covered in snow less than three weeks ago and despite the continuing early chill in the air Bresnan found some noticeable away swing which produced two slip catches as the Indian batsmen were exposed by the moving ball, as if at Trent Bridge in May.

Rohit Sharma was sharply taken to his right by James Tredwell and after a near replica edge next up, Virat Kohli was pouched at the fourth attempt by the spinner, with Cook poised underneath, like a midwife at a birthing pool, for any spillage.

Steven Finn maintained the pressure by squaring up the dangerous Yuvraj Singh, the leading edge drifting in the high altitude to backward point to dismiss the left-hander for a duck.

Tredwell was in the action again in the 10th over when he clutched Raina's edge off Chris Woakes in his left hand as he dived full length at second slip but the ball escaped from his grasp.

Woakes, brought in for the errant Jade Dernbach, was soon hit for three fours in an over by the pugnacious Raina but a quirk in the laws led to England's next success.

The umpires deemed that Bresnan had been off the field too long to be able to bowl immediately so Cook turned to Tredwell, who struck with his second ball as Gautam Gambhir (24) cut lazily and Bell held a smart low catch to his left to bring India skipper Mahendra Dhoni to the crease in the 13th over.

Finn was brought back in a bid to make a breakthrough and he did so in the second over of his new spell when Dhoni was trapped on the crease lbw for 15.

India needed a partnership and it was provided by Raina and Ravi Jadeja, who recorded the fifty stand from 76 balls by dispatching Joe Root down the ground and into the upper tier.

Raina was reprieved again when Cook fumbled at backward square-leg off Tredwell, but in his next over the redoubtable Kent spinner collected his 11th wicket of the series when Jadeja's agricultural swipe at a turning ball looped gently to backward point.

England claimed the important scalp of Raina in the 42nd over when the left-hander was deceived by a slower ball from Woakes to give Bell his third catch of the innings, though Samit Patel conceded 12 and 15 in separate overs as 49 were mustered from the final eight.

Bresnan, left out of the tour to New Zealand to rest an elbow problem, ended the innings in the final over with India some distance short of what was considered a par total.

Cook and Bell were determined not to suffer the same fate as the Indian top order and overcame some fortuitous early edges with calm assurance as the 50 arrived in the 11th over.

When Ishant Sharma nipped one to breach Cook's defences, England seemed content to keep wickets in hand, although Kevin Pietersen could not resist a short ball and Jadeja took an excellent running catch on the boundary.

Jadeja, India's leading wicket-taker in the series, was not introduced until the 27th over, at which point England looked in command.

But the purposeful Root, yet to make fewer than 30 in his short ODI career, had an uncharacteristic rush of blood with 84 still needed when he made no contact with a pull shot at a turning delivery from Jadeja and was bowled.

However, Morgan, who had made only 13 in his previous three innings, launched Ashwin down the ground for six to record the fifty stand in his 40 from as many balls, leaving the adroit Bell, the only centurion in the series, to hit the winning run.