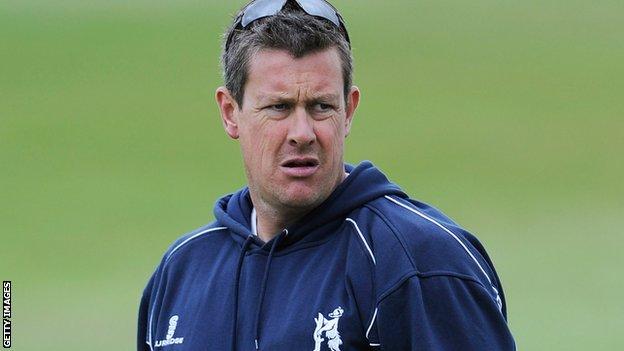 Limited-overs coach Ashley Giles believes England's one-day series in India was "not a disaster", despite losing the five-match tour 3-2.

After winning the first game, England lost three in a row before finishing with a seven-wicket win on Sunday.

England were beaten 5-0 in India in 2011, and Giles believes they have shown considerable improvement.

"We have done pretty well with a fairly inexperienced side - 3-2 is not a disaster," he said.

"We did not win the series but we have learned a lot."

Not only does Giles believe it has been a good learning experience for his players, but also for himself in his first tour since being named head coach last November.

"Certainly I have learned a lot about this level and as the tour has gone on I have become more and more myself," he added.

"It has been an enjoyable tour, playing cricket in these beautiful arenas, and while we are disappointed to lose, we have learned a lot."

One player who particularly impressed was Yorkshireman Joe Root. The 22-year-old batsman enjoyed a fine Test debut in December and continued to make an impression in the one-day side, averaging 54 runs.

"I didn't know he could bat as well as he has," said Giles.

"He had all the ingredients to show that he could bat really well. He just looks at home and he's the sort of player with which English cricket is in good hands.

"Joe's had a fantastic first tour and has developed game on game into someone who is playing all forms of the game."

Another positive to come from the tour was the performance of Kent spinner James Tredwell. The 30-year-old finished as England's most impressive bowler with 11 wickets.

It was a timely reminder to England's selectors of his ability, and Giles added: "It just gives us great options - I don't see at some point why you couldn't play two off-spinners in the same side.

"Tredders has been fantastic this trip, he was 'Steady Treddy'."