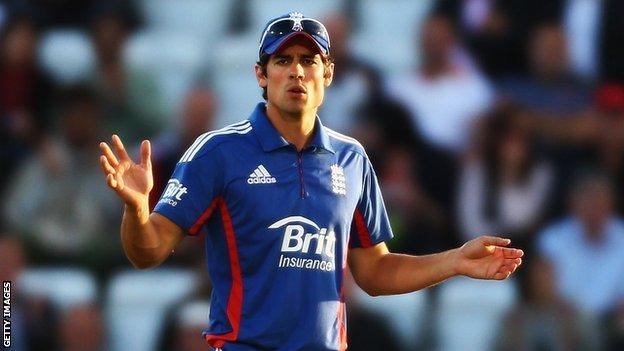 I can't say it came as a shock to see England lose the one-day international series 3-2 given their dismal recent record in 50-over cricket in India.

England played well in the first game but were then heavily beaten in the next three. Although they bounced back strongly to win the final match, we should not overlook the fact that it was a dead rubber played in conditions much more suited to England's strengths.

Despite the series loss, England can take some positives from the tour - the continued rise of Joe Root and the bowling of Steven Finn and James Tredwell among them - but there is still plenty of room for improvement in their overall one-day cricket.

With the New Zealand series fast approaching, and the Champions Trophy looming in the summer, I've picked out three key areas of concern.

One aspect of the game which is holding England back is the number of dot balls they allow the opposition to bowl. This was particularly noticeable against left-arm spinner Ravindra Jadeja, whose economy rate for the series of 3.49 runs per over was comfortably the best of any bowler on either side.

England's case for the defence

Best of luck to England's women as they embark on their World Cup campaign in India. The hardest thing for any team is to defend their trophy because the opposition will single you out as the team to beat but Charlotte Edwards's side are more than capable of doing just that. They have a set-up as professional as you will find anywhere in the world, and their desire and attention to detail mirrors that of the men's side.

With the new fielding restrictions meaning more men inside the circle during non-powerplay overs, it is harder than ever to find gaps in the field and this was highlighted by the number of times the England middle order became bogged down, with the scoring rate almost grinding to a halt at times.

Just as every player needs to be able to put away the bad balls, they also need to develop methods of scoring off the good ones. The very best one-day players, such as Mahela Jayawardene and Hashim Amla, make sure that even defensive shots bring singles.

They have the ability to open and close the face of their bats to place the ball into the spaces so that even when their team is under the cosh the scoreboard keeps ticking over.

I don't expect this to change overnight, but if England can look to find a way of scoring runs off 12 more balls over the course of 50 overs, suddenly a total of 250 could become 265 or 270.

Often that margin can be the difference between winning and losing.

Once again, England's lack of an all-rounder was exposed in India. Circumstances and player availability does dictate but I'm not a fan of playing only four front-line bowlers and then relying on a mix of players to make up the remaining 10 overs of an innings. Ideally you need five players who are fully capable of bowling 10 overs in every match, and a sixth man who can step in if required.

Joe Root did a decent job with the ball on the turning pitches in India, but is he really going to bowl eight to 10 overs on the less spin-friendly conditions of New Zealand, or at home in England where the Champions Trophy will be held?

To be a really top side in all conditions, England need to find someone who can bat at seven and bowl their full quota. At the moment it looks like Chris Woakes will be given the chance to stake his claim in New Zealand in the absence of the injured Tim Bresnan, but I see Rikki Clarke as another option for the summer.

Clarke has always had the talent, and since moving to Warwickshire his commitment and attitude have improved along with his performances. His inclusion in the Lions squad to tour Australia shows England are keen to take another look at him.

His batting and fielding are certainly good enough to get into the top seven and if he can fine-tune his bowling, he could just fit the bill.

I read the other day that since I hung up my gloves 10 years ago England have now fielded 10 different wicketkeepers in one-day internationals, which highlights what a problem area it has been for the side.

With Craig Kieswetter out of the picture for now, Jonny Bairstow and Jos Buttler will head to New Zealand ready to battle it out for what is a crucial position.

Both have shown flashes of their potential with the bat but are still learning their trade with the gloves and must continue to work hard on their keeping skills with coach Bruce French.

If it doesn't work out for Bairstow or Buttler, I hope the selectors have not forgotten about Matt Prior. The Sussex keeper may have failed to take his opportunities in the past and has not played an ODI since March 2011, but it may soon be time to give him another chance to transfer his brilliant Test form to the one-day arena.

Another man who should not be forgotten is Surrey's Steven Davies, who was harshly axed just before the last World Cup.