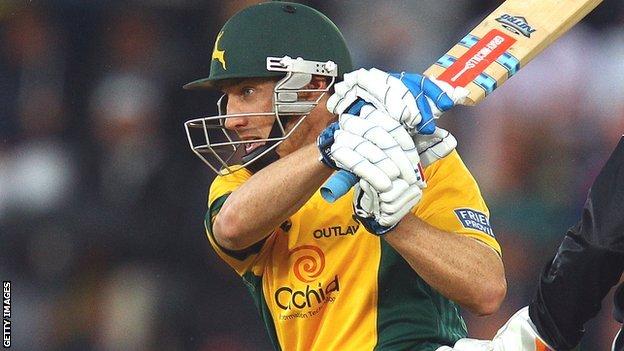 The 35-year-old will be available for the Outlaws' Twenty20 campaign, as well as five County Championship and four CB40 matches.

"David has been my first thought when recruiting overseas players for 10 years now," said Notts director of cricket Mick Newell.

"There are lots of things I enjoy about playing for Notts," added Hussey.

"But the characters in the dressing room, the atmosphere at Trent Bridge and the fact that the team are always competitive are the main reasons.

"I have a great relationship with Mick Newell and Chris Read and we have some good discussions about how we want to play things."

Hussey, who did not feature for the county last year, has played all but two seasons at Trent Bridge since 2004.

He will share the overseas duties with Australian batsman Ed Cowan, who signed for Notts in December.

Newell continued: "It has become increasingly difficult to sign a quality overseas player for an entire season.

"But we are pleased that David and Ed Cowan will both spend a good amount of time with us."

The right-hand batsman returns as captain of the Outlaws Twenty20 side and is determined to enjoy success as skipper.

"Captaining Notts Outlaws is something that I really enjoy and my method is to try and think two overs ahead of everybody else and to bring some stability in pressure situations," Hussey said.