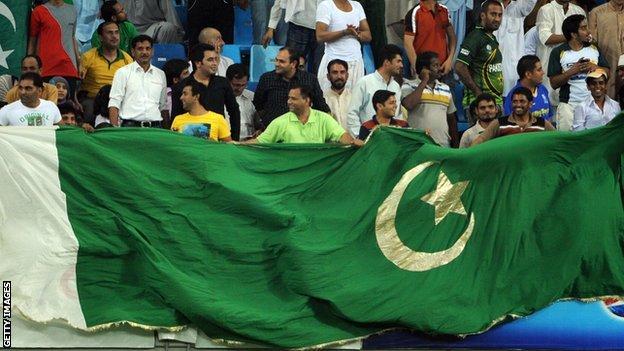 Leading international cricketers have signed up to compete in the Pakistan Super League despite security concerns, according to the event's top adviser.

Lorgat rebuffed claims from players' union boss Tim May that players would stay away because Pakistan is unsafe.

"At this stage I am not at liberty to release names, but they are from across the globe."

The Pakistan Super League (PSL), scheduled for 26 March to 7 April, is being billed as a chance to prove that the country is ready to host top-level international cricket for the first time since gunmen attacked the Sri Lanka team bus in Lahore in 2009, killing seven policemen and injuring six players.

Going back to Pakistan

But the Federation of International Cricketers' Associations (Fica), of which May is chief executive, is urging players not to take part in the tournament after receiving worrying reports on the current level of danger from an independent security firm.

"The security consultants came back and said that the risk of touring Pakistan in a cricketing sense is unmanageable," former Australia off-spinner May told BBC Sport last week. "I think you'll find the majority of current international cricketers will heed our advice."

Lorgat, however, cast doubt on the security advice and argued that the city of Lahore - where PSL matches will take place - is safer than other areas.

"I can understand where Tim is coming from but I'm not sure if these agencies have been to Pakistan, or been to Lahore and done the assessment on the ground," said Lorgat, who served as ICC chief executive from 2008 to 2012.

"I've been to Lahore on a number of occasions in the last few months and I'm quite comforted by what I see. I'm also getting an understanding and appreciation that some of the unsafe areas are not where the games will be played.

"In my days back in South Africa there were certain no-go areas because you were setting yourself up to be in the wrong place at the wrong time and I see the same thing in Pakistan."

The PSL player auction will take place on 24 February with players divided into categories.

Players have been offered life insurance cover of up to $2m (£1.26m) to play in the competition, the Daily Telegraph reported last week.

English players will only be allowed to compete if they receive "No Objection Certificates" from the England & Wales Cricket Board, with counties believed to be concerned by the proximity to the start of the County Championship season on 10 April.

Lorgat feels the tournament is an essential step on the road to Pakistan welcoming international matches again, having played the majority of their "home" matches in the United Arab Emirates for the past four years, as well as in England and New Zealand.

"It's safe to say Pakistan have had a very unpleasant few years not being able to play cricket at home and it's perfectly understandable that most of the other cricket nations were unwilling to go there but we can't have that situation for ever," he said.

"We are a family of cricket members and we have to do what we can to support them. Without it, it will be really difficult for them to sustain growth and levels of interest in the game."