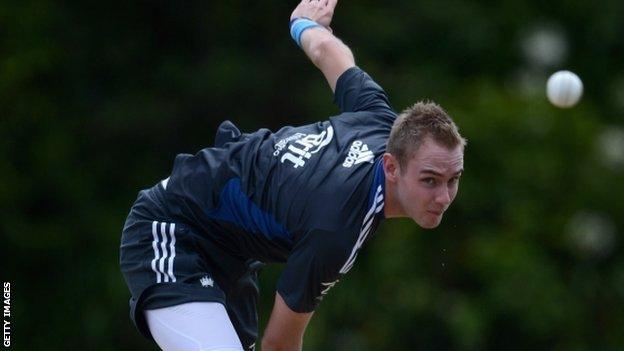 England limited-overs coach Ashley Giles believes the return of Twenty20 captain Stuart Broad for the tour of New Zealand is a boost for his side.

Broad, 26, has come through his first outdoor bowling session with no ill-effects since leaving the tour of India in December with a bruised heel.

The seam bowler's place in the side had already come under scrutiny after he was dropped during the Test series.

But Giles said: "He's got a major part to play in three forms of the game."

Broad, who was the leading wicket taker among pace bowlers in 2012 with 40 Test scalps, failed to take a wicket in India as England won the four-match series 2-1.

He missed the two Twenty20 games (one win, one defeat) and the 3-2 one-day series defeat, while fellow fast bowler James Anderson and first-choice spinner Graeme Swann were rested for the 50 over matches.

Swann will miss the three Twenty20s in New Zealand while batsman Kevin Pietersen will also be absent for the three ODIs which follow as England embrace the concept of regular rest for their first-choice players.

However, Giles is confident that England have enough talent within the squad to cope.

"This is a good position to be in," said the former England spinner. "We've got a lot of strength in depth.

"We showed that by taking a relatively inexperienced bowling attack to India for the one-dayers, and leaving some really good players behind.

"That's a key for us. We need to look after our good players really well, keep them hungry and on top of their game."

England will play their first warm-up match against a New Zealand XI in Whangarei on Monday.