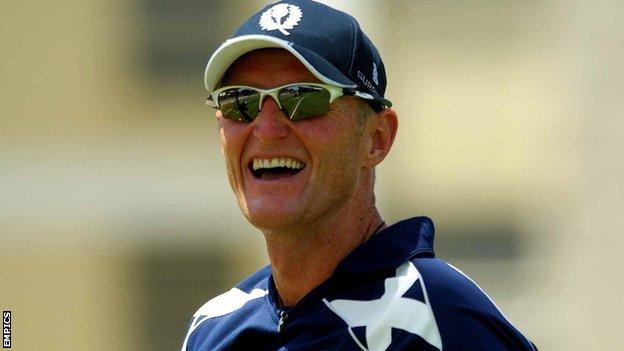 Warwickshire have named former all-rounder Dougie Brown as their new director of cricket.

The 43-year-old Scot was formerly assistant to Ashley Giles, who is now coach of England's limited overs side.

The Bears won the County Championship last summer, but Brown insisted there would be no resting on laurels.

"Last year's success is now just that - as champions every other team will be looking to take our scalp so we need to be better prepared than ever," he said.

"It is a real honour for me to be given this opportunity to lead Warwickshire Cricket with the strong coaching support of Graeme Welch and Tony Frost.

"As a club and as a squad we are in a good place at the moment but we are very determined to deliver sustained success on the pitch. This will only be achieved if we keep working hard, stick together and perform consistently," Brown told the club's website.

He played alongside Giles in the successful Warwickshire side of the 1990s and also represented both England and Scotland at international level, as well as coaching Namibia at the 2003 World Cup.

The club began their search for a new director of cricket when Giles left Edgbaston last November.

Chief executive Colin Povey confirmed that both internal and external candidates had been considered, but said Brown's appointment would ensure continuity and ensure "established cricket policies and processes remain in place".

He added: "Dougie knows the club and the current crop of players as well as anyone, so he is well placed to take the squad forward."

As champions, Warwickshire will begin the new county season by facing an MCC XI in a four-day curtain-raiser in Abu Dhabi, starting on 24 March.

They open the defence of their title on 10 April when they take on newly promoted Derbyshire at Edgbaston.