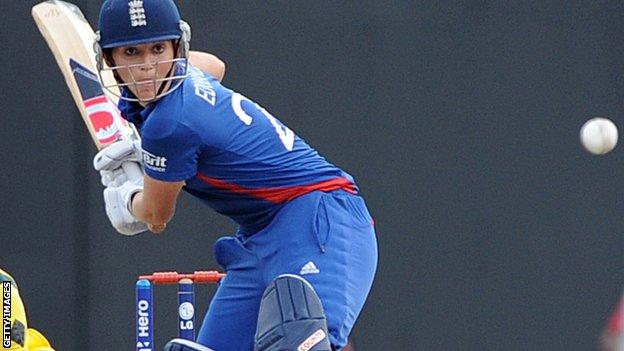 Captain Charlotte Edwards says it is right that high expectations are being placed on England at the Women's Cricket World Cup.

The defending champions begin their campaign against Sri Lanka in Mumbai on Friday.

"We've earned the tag of being number one and favourites," the 33-year-old told BBC Sport.

"It's not a pressure from within the group, but expectations outside the camp are high and probably rightly so."

England are favourites to lift the World Cup for a third time, but they were beaten in the final of the last major women's tournament, losing to Australia at the World Twenty20 in October.

"We were bitterly disappointed after that tournament and it spurred us on over the winter," added Kent batter Edwards.

"But it's forgotten about now. This is a different form of the game, the form that is the pinnacle of our cricket.

"I know for many of the girls, winning the World Cup in 2009 will live with us for the rest of our lives so we want to recreate those memories again."

England begin against Sri Lanka having beaten South Africa and lost to New Zealand in their two warm-up games.

Also in Group A are West Indies and hosts India, with the top three teams carrying their points to the Super Six stage, where they will meet the three sides who have qualified from Group B.

"In these conditions especially we have to be prepared for every single team and I'm sure that some of the top sides will slip up in this tournament," added Edwards.

"India are strong and West Indies have X-factor players. We know we have to win every game to guarantee a final spot.

"I wouldn't write Pakistan or Sri Lanka off in these conditions either. It's set up really nicely."

England are set to include Sarah Taylor in their line-up. It will be the wicketkeeper's first international cricket since she revealed she was in talks to train with the Sussex second XI.

Edwards does not believe talk of a potential switch to men's cricket puts any extra pressure on the 23-year-old.

"It's been very much blown out of proportion," she said. "Sarah is a very level-headed girl, I don't think I have to look after her.

"There's been expectation on her shoulders for a couple of years now as our number one batter.

"I'm expecting big things from her. Hopefully it will be forgotten during the next few weeks and maybe she can talk to Sussex when she gets back."

BBC Radio 5 live sports extra will have ball-by-ball commentary on all of England's games and the final, with live text commentary on the BBC Sport website.