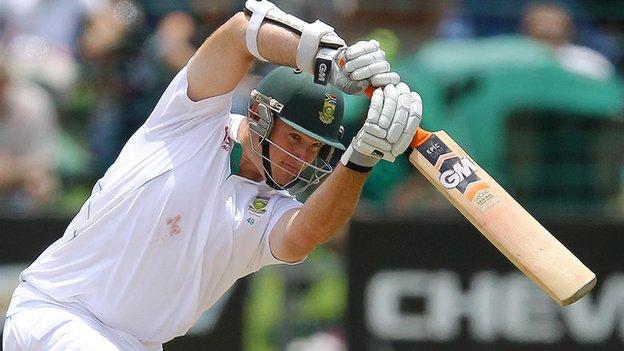 South Africa's Graeme Smith will become the first cricketer to captain in 100 Tests when he leads his team out in the first Test against Pakistan on Friday.

Smith, who will also be celebrating his 32nd birthday, has led his side to the top of the world rankings and made 26 centuries in his 10 years as skipper.

"I don't think [his feat] will be achieved again very soon, if ever," said team-mate Jacques Kallis.

Sports minister Fikile Mbalula said Smith was "in a league of his own".

"All South Africans are proud of him," he added.

In 2003, Smith became his country's youngest Test captain when he led the Proteas against Bangladesh at the age of 22 years and 82 days, taking the helm in the wake of Shaun Pollock's resignation following that year's home World Cup.

He guided them to the top of the International Cricket Council Test rankings with the 2-0 victory in England in 2012, and has subsequently overseen series wins in Australia and at home to New Zealand.

"He's very driven to make the team the best it can possibly be, while at the same time maintaining his own high level of play," said predecessor Pollock.

"It has been emotional and humbling," Smith said in a television special to mark his achievement. "When I wake up tomorrow, turning 32 and leading South Africa out is going to be one of the proudest moments in my career and my life."

He also admitted he had taken some time to adjust to the demands of captaincy.

"When I started I thought captaining was just an on-field thing, making some decisions and showing some leadership," he said.

"Wherever I went early on, teams were taking me on, the media was taking me on, and that was where I developed this hardness, this arrogance. It was my way of protecting myself and I came across in not a very well-liked way."

Smith signed a three-year deal to captain Surrey from 2013 and will play in 10 County Championship matches, as well as leading the side in Twenty20 and 40-over games.