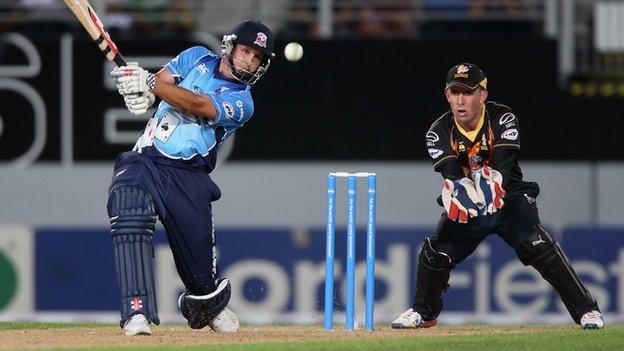 The international players' union (Fica) described the security situation in Pakistan as "unmanageable".

But with top players being offered $100,000 (£63,000) for the two-week tournament, Mustard believes the rewards outweigh the risks.

"I'd like to think that over the two weeks I could make a name for myself," Mustard told BBC Sport.

"But it's an auction-based thing and I'm not going to go over to Pakistan and risk a few things for less than $100,000."

Fica and England's Professional Cricketers' Association (PCA) have called on players to avoid the 25 March-7 April competition because of concerns over security in Pakistan, which has not hosted international cricket since gunmen attacked the Sri Lanka team bus in 2009.

The governing bodies of Australia and South Africa have both indicated that they would not support contracted players taking part.

But Durham's Mustard, 30, says he has been reassured by conversations with fellow players and officials at the Bangladesh Premier League, where he is currently competing for the Barisal Burners.

"It only came to my attention about a week ago," said Mustard, a big-hitting keeper-batsman who played 10 one-day internationals in 2007 and 2008 and has recently played Twenty20 cricket in New Zealand and Zimbabwe.

"My agent got in touch and asked if I would be interested in going. My first instinct was 'no' but in Bangladesh I have spoken to a couple of the Pakistan players and a couple of guys from the ICC [International Cricket Council].

"They say it is all going to go ahead and the security is going to be amazing. There are going to be bullet-proof buses and everything else."

"The Pakistan Cricket Board is all set to kick off the Pakistan Super League which it hopes will break a three-year long drought of international cricket in the country. Lahore, where the league will be played, is by far the most peaceful urban centre by Pakistani standards. In addition, ensuring the players' security will be a matter of prestige for the provincial government there, which faces elections in three months' time.

"But concerns will remain. Lahore has had its share of militant attacks, including the 2009 attack on the Sri Lankan team that ended international cricket in Pakistan. The PCB has been keen to revive the game, but has faced difficulties. The Bangladesh team declined a tour of Pakistan twice, citing security concerns, and an unofficial tour by a World XI in October did little to revive the confidence of international cricket bodies. "

Mustard, who is married with two children, aged six and four, says his wife has been supportive of his decision.

"She is pretty happy for me to go and if she's happy I'm happy," he said. "The money does really help me and the family."

Mustard is one of a number of English county players weighing up whether to enter the player auction on 24 February, which organisers say will feature at least 50 overseas players.

In order to compete, however, any player contracted to an English county will need a No Objection Certificate (NOCs) signed off by their club and the England & Wales Cricket Board (ECB).

The PCA is believed to be urging the ECB to reject NOCs, but the English board is eager for the counties to take the lead.

Durham said they were unlikely to grant him permission to play in the tournament because it finishes three days before the start of the County Championship season.

"We have had a clear indication from the PCA and the ECB that there were genuine safety concerns but in that respect it should ultimately be Phil's final call," chief executive David Harker told BBC Sport.

"However, from a pure cricketing point of view the timing isn't good and we are likely to decline more because of the potential interference with the start of our season."

Should other counties follow Durham's lead, the Pakistan Super League could take place without any players from England, Australia or South Africa, a situation that would disappoint Pakistan all-rounder Shahid Afridi.

"Pakistan cricket is suffering because of non-cooperation and it is high time that other nations contribute to our efforts," he said. "Don't leave us alone,"