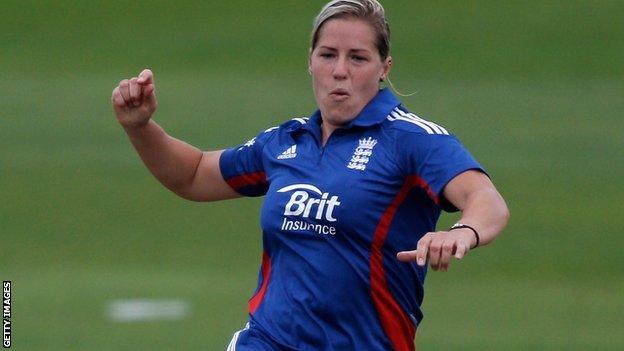 England's defeat to Sri Lanka in the opening game of their World Cup defence is an "ideal kick", according to former batter Ebony Rainford-Brent.

Charlotte Edwards's side need to beat hosts India on Sunday and then defeat West Indies on Tuesday to guarantee a place in the Super Six stage.

Rainford-Brent says England know how to perform under pressure and expects them to recover from Friday's defeat.

The India match will be played at the Brabourne Stadium in Mumbai with the West Indies game at the Bandra Kurla Complex, also in Mumbai.

If England finish in the top three in their group they will advance to the Super Six stage.

"It will motivate them to say 'we're here and need to perform'," she said.

England are the top seeds in Group A, but suffered their first ever defeat to Sri Lanka - the lowest-ranked team in the tournament - as the minnows chased down 239 to win by one wicket from the final ball of the match.

But, with the defending champions having earlier slipped to 29-3 and then showing ill-discipline with the ball, Rainford-Brent said England must be better in all aspects of the game.

"You can't often afford to lose three wickets for 29 and, apart from Katherine Brunt, the bowling wasn't on the mark and the fielding wasn't up to scratch," said Rainford-Brent, who played 22 one-day internationals for England.

"They need to go away, refocus and start from scratch. The errors weren't necessarily technical, more perhaps in the mind-set and approach. The key thing is to come back with focus and energy."

England have only one day to recover from the Sri Lanka defeat before taking on India, who thrashed West Indies by 105 runs in the opening match of the tournament.

But Edwards believes the swift turnaround is no excuse for England not to put in an improved display.

"For some of us, it's one of the biggest games we could ever play in. We have to back ourselves, we've done well against them in the past and hopefully can do that again.

"If we don't win, we need other results to go in our favour. But we're not thinking like that, we just have to beat India and beat West Indies."

"England have got a very good batting line-up but I don't think are very strong in the bowling attack, other than Katherine Brunt," said Raj. "They really depend on her for the breakthroughs.

"We played England last year so most of our batsmen are very comfortable playing their bowlers. Tomorrow is a different day, we are expecting all kinds of situations and are prepared for everything.

"I don't think we will have any different mind-set [from the win over West Indies]. I will tell my girls to be very positive.

"This being a day game will not affect us, we know that the ball might move for the first four or five overs then batting will b good for the rest of the match."