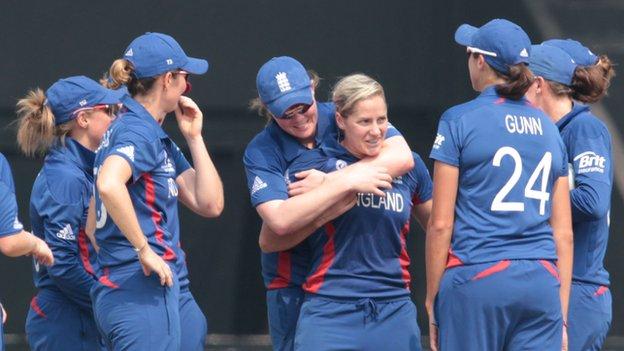 On Saturday, Raj said that the defending champions' bowling was "not very strong" and dependent on Brunt.

"We were keen to win this match but that gave us extra fire. I'm protective of my team because they are fantastic cricketers who deserve more credit."

The 27-year-old Yorkshire pacer added: "We all wanted to come out here and show that we're a whole bowling unit."

The girls saw me moping around on Friday night, but I got over it and I knew it was really important for us to be positive

England were indebted to Charlotte Edwards for their total of 272-8. The captain hit 109 to become the highest run-scorer in women's one-day internationals.

The home side were then reduced to 29-3 by Brunt and Anya Shrubsole and, although Harmanpreet Kaur struck an unbeaten century, India fell short on 240-9.

"It was important I was out there for the team, leading from the front is very important to me," said Edwards.

"I was pleased I went on and scored a big hundred, hopefully I can carry that on for the rest of the tournament."

England's win over India goes some way to erasing the shock one-wicket defeat by Sri Lanka in their opening game of the tournament.

Indeed, if England beat West Indies in their final group game on Tuesday, they can still carry the maximum four points to the Super Six stage.

"To start the tournament in the manner we did we really hurt me," continued 33-year-old Kent batter Edwards.

"The girls saw me moping around on Friday night, but I got over it and I knew it was really important for us to be positive today.

"Today was about character, coming out and improving on Friday and that's certainly what we did.

"We are back to the England side I know and we've got to keep that standard now."