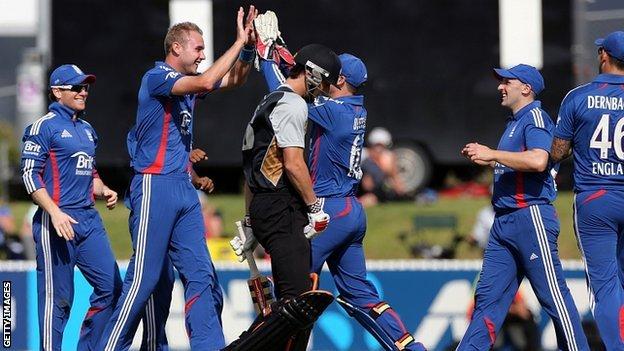 Captain Stuart Broad took a hat-trick as England romped to a 46-run Twenty20 victory over a New Zealand XI in the opening warm-up match of their tour.

Batting first, England racked up 186-3 in Whangarei, with Jos Buttler smashing 57 off 24 balls and Eoin Morgan 48.

Chris Woakes (3-27) and Jade Dernbach (3-24) worked their way through the Kiwi top order to put England on top.

And Broad removed three tailenders in successive balls in the penultimate over as the hosts were 140 all out.

"Stuart Broad's hat-trick helped polish off the home's side innings but it came at a time when the game was over as a contest. However, Jos Buttler was the real star of the day.

"Buttler came in in the 15th over when usually there is little time to make a significant impact, but his innings proved the difference. He batted with dead-eyed ruthlessness and produced a variety of strokes, including a clever and skilfully executed scoop, or 'ramp', for four off Ian Butler. His destructive hitting eclipsed even Eoin Morgan, who played expertly for his 48 not out."

The hat-trick crowned a successful return to England colours for Broad, who was forced to leave the tour of India in December with a bruised heel.

The tourists had lost Alex Hales early, driving a length ball to mid-off, before Michael Lumb was caught at deep cover for 25 off as many balls.

Luke Wright upped the ante with 44 off 32 balls in a stand of 61 in seven overs with Morgan.

But his departure merely cleared the stage for wicketkeeper-batsman Buttler, who cracked three sixes and six fours in his first fifty in an England shirt.

The New Zealand XI reply was soon in disarray after Woakes dismissed Anton Devcich for five Hamish Rutherford for nine.

The hosts lost wickets at regular intervals as the required run rate spiralled into double figures.

And when Chris Munro was bowled by Dernbach for 55 with the last ball of the 18th over the game was effectively up.

There was still time for Broad to snatch some late glory, however, as he had Andrew Ellis caught on the deep mid-wicket boundary, Ian Butler caught at mid-on off a skier and Matt Henry caught behind by Buttler.

Dernbach then removed Michael Bates with the penultimate ball of the match to round off a highly satisfying match for the tourists.

England play the same opponents on Wednesday before the first of three Twenty20 internationals against New Zealand on Saturday, with the one-day and Test series to follow.