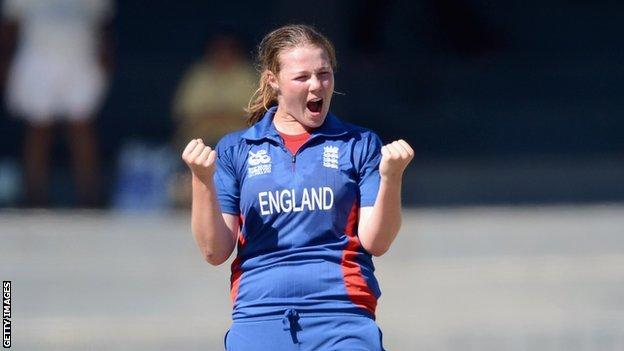 England beat West Indies by six wickets to book their place in the Super Six stage of the Women's World Cup in India.

The Windies were made to rue their decision to bat first in seam-friendly conditions, being bowled out for 101 with Anya Shrubsole taking 4-21.

England reached their target for the loss of four wickets, Danielle Wyatt making a career-best score of 40.

Sri Lanka's emphatic victory over India, which knocked the hosts out of the tournament, means England will take two points through to the next round.

Teams carry through the points they pick up against fellow qualifiers and England lost to Sri Lanka in their opening match before beating India.

"Anya Shrubsole bowled with pace and control. Her line against the left-handers was wayward against India but she got movement and bounce. I think she deserves the player of the match award. I hope Katherine Brunt's fine, as she rolled her ankle slightly - we think it may have been in celebration. It's the sort of thing the coaches will be a little annoyed about, but at least they've got two days off until the next game, while that should also help Charlotte Edwards who has been ill today."

However, England will carry momentum into the second phase after putting that early shock defeat behind them to finish top of their group on run-rate from Sri Lanka.

They were, however, partly indebted to Windies captain Merissa Aguilleira for this victory. When England lost the toss for the third time in the tournament, Aguilleira opted to bat first on a greenish pitch covered in morning dew.

The decision was instantly shown to be the wrong one as Katherine Brunt and Shrubsole removed openers Kycia Knight and Stefanie Taylor in the first two overs.

In all, nine wickets fell to seam bowling. Only when England turned to spin after Brunt was forced from the field with an injury were West Indies able to put up any sort of resistance in the shape of a 59-run stand between Kyshona Knight and Shanel Daley.

Brunt had figures of 2-10 from her six overs when an ankle injury ended her participation, leaving England to worry over her fitness before their opening Super Six contest against Australia on Friday.

Her last meaningful act was an important one, however, as she found away swing to have the dangerous Deandra Dottin - scorer of a 20-ball half-century in West Indies' win over Sri Lanka - caught behind by Sarah Taylor.

That left West Indies in the hopeless position of 31-6, Shrubsole having previously caused most of the damage.

Stefanie Taylor had scored 171 against Sri Lanka, but seam movement from Shrubsole saw her leg stump pinned back. The Somerset right-armer then accounted for Shemaine Campbelle and Juliana Nero in the same over and, when Aguilleira took a suicidal single to Lydia Greenway - who was winning her 100th cap - the Windies were in tatters.

But, after Dottin went, Kyshona Knight and Daley were watchful as England spinners Holly Colvin and Laura Marsh were given little assistance.

Knight found the boundary only once in her 86-ball 33, an innings that was finally ended when England turned to the medium pace of Arran Brindle, the beneficiary of Sarah Taylor's smart stumping.

With Brindle hitting the seam to account for Shaquanna Quintyne and Tremayne Smartt, she had figures of 3-0 from two overs while Shrubsole returned to trap Subrina Munroe lbw and leave Daley stranded on 30 not out.

Brindle, opening in place of the ill Edwards, and Danielle Wyatt negotiated an eight-over spell before lunch and, when the players returned, England's progress slowed almost to a standstill in an apparent bid to keep the Windies net run-rate higher than Sri Lanka's.

However, the ponderous nature of the chase did England few favours and, when Brindle was caught behind off Dottin, it sparked a mini-collapse that saw four wickets fall for 13 runs.

The aggressive Dottin trapped Sarah Taylor and Greenway lbw, with Wyatt falling in similar fashion to Munro in between.

No longer in the mood to hang around, Jenny Gunn and Heather Knight upped the tempo to finally send England into the Super Sixes.

England were joined in the Super Sixes by South Africa, who thrashed Pakistan by 126 runs to send the Asian side into a play-off against India for seventh place.

Marizanne Kapp starred with bat and ball for South Africa, making 102 not out in their total of 207-5 before taking 3-18 as Pakistan were bowled out for 81.

In the match between the two teams that had already qualified from Group B, Australia overcame New Zealand by seven wickets.