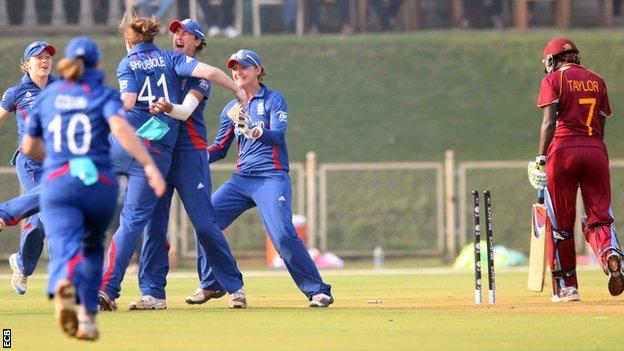 Pace bowler Anya Shrubsole says momentum is with England after the defending champions qualified for the Super Six stage of the World Cup.

England bounced back from losing to Sri Lanka with wins over hosts India and West Indies to reach the next phase.

"There are always things you can improve on, but we'll head into the Super Six with some confidence," Shrubsole told BBC Sport.

England secured their place in the next phase with a six-wicket win over West Indies and finished top of their group on net run-rate despite Sri Lanka's crushing victory that knocked hosts India out of the tournament in the group's final match.

Charlotte Edwards' side will take on World Twenty20 champions Australia in Mumbai on Friday in the first of their three matches in the Super Six stage.

They take two points through from the group stage courtesy of their victory over West Indies, the third team to qualify from their group.

England took advantage of West Indies' decision to bat first in seam-friendly conditions on Friday and bowled the Caribbean side out for 101 at Mumbai's Bandra Kurla Complex.

"We were a little surprised," said Somerset seamer Shrubsole, who took career-best figures of 4-21.

"We were keen to bowl first if we won the toss because we've seen that the ball moves around in the matches that start early."

Shrubsole was pleased with her performance, particularly after India captain Mithali Raj said that England rely too heavily on new-ball partner Katherine Brunt.

"Mithali said a lot about Katherine being the only threat, but we have a lot of belief," added 21-year-old Shrubsole.

"It's not just me, it's the spinner as well. We know we've got a world-class bowling attack here and we backed that up again today."

"If I was given the chance again we would have bowled first," said the wicketkeeper. "The conditions were suited to bowl so that was a decision that could have gone differently."

As well as Australia, England will face South Africa on Sunday and New Zealand on Wednesday. The final will be played on 17 February.