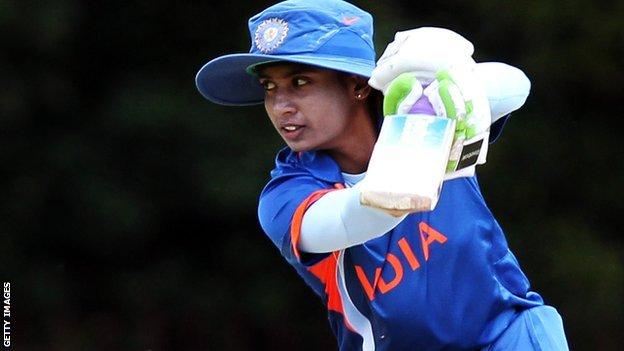 Hosts India were knocked out of the Women's World Cup with a 138-run defeat by Sri Lanka in their last group match.

Chasing 283, India would have secured a place in the Super Six stage on net run-rate had they made at least 251, but they crumbled to 144 all out.

Sri Lanka, the lowest-ranked team in the tournament, who also stunned England in their opening match, had never beaten India in one-day cricket.

Sri Lanka captain Shashikala Siriwardene said she hoped Indian fans would embrace her side as the last Asian side left in the tournament before her media conference was interrupted by a call from the nation's president, Mahinda Rajapaksa.

"He said he'd never seen a match like this and wanted to congratulate us," said Siriwardene. "He wished us luck for the rest of the tournament."

England had sealed their progress with their earlier win over West Indies, but required India to advance for them to carry forward the maximum of four points.

Group B sides Australia, New Zealand and South Africa are the other three teams to advance.

After finishing bottom of Group A, India will take on Pakistan in a play-off to determine seventh and eighth place.

Protests from a right-wing political party against Pakistan's presence in Mumbai caused all their fixtures to be moved to the city of Cuttack, about 1,000 miles away.

India must now travel to play that game on Thursday, the day before the Super Six stage begins.

"I really didn't think we would we be in these circumstances at the start of the tournament," India captain Mithali Raj told BBC Sport.

"It's very disappointing to be out of the tournament. I can't sum up what my team is going through after this defeat."

Raj had previously suggested the tournament was an opportunity to advance the women's game in India, and conceded that the chance had been missed.

"It was an occasion for us to do well in front of a home crowd," said the 30-year-old batter. "To get the sport the kind of awareness, marketing and publicity it needs, this was a big opportunity for us."

Raj began the tournament as the number-one ranked batter in the world, but managed only 29 runs in three innings.

"I don't play the game for rankings, but it's more important for me how many runs I score for my country," she said. "I can't talk about the future but, as a team, we will take a little while to come out of this disappointment."

On her future as captain, she added: "That is the call of the selectors."