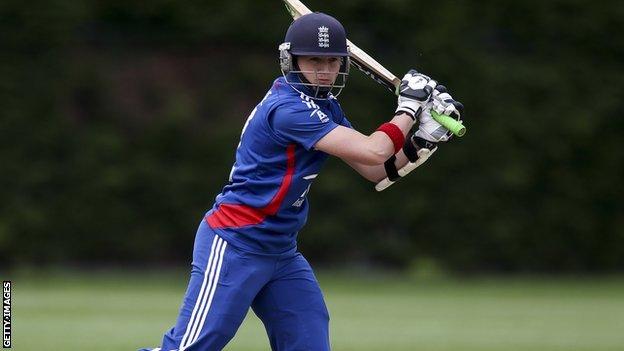 "That's the beauty of the World Cup, it's very open," she told BBC Sport.

"Beating Australia may open it up even more for the other teams but we just want to go out and win three games."

The Super Six format sees teams carry points forward from the results achieved against other qualifiers from their first-round group.

Australia qualified at the top of Group B with three wins from three matches, while England dropped points in their shock defeat by Sri Lanka.

As a result, the Aussies can take a huge step towards the final with victory in Mumbai, while defeat would leave England needing other results to go in their favour in order to keep their defence of the trophy they won in 2009 alive.

England also have history against them, having not beaten Australia in a World Cup match since 1993.

"We know what we're going to get with Australia," added 31-year-old Brindle. "They will be tough opponents wherever you play them.

"But if we do the right things and execute our plans then we will also be hard to beat."

Sri Lanka, who play New Zealand on Friday, secured their place in the final six with another upset win over India on Tuesday.

As a result, the hosts were knocked out and had to settle for victory over six-wicket win over Pakistan in the seventh-eighth place play-off on Thursday.

"When you have the host country going out early it will always detract a little bit from the support," continued Lancashire's Brindle.

"But, likewise, we've had a lot of people saying that now India are out they are going to support England. Hopefully that works in our favour."