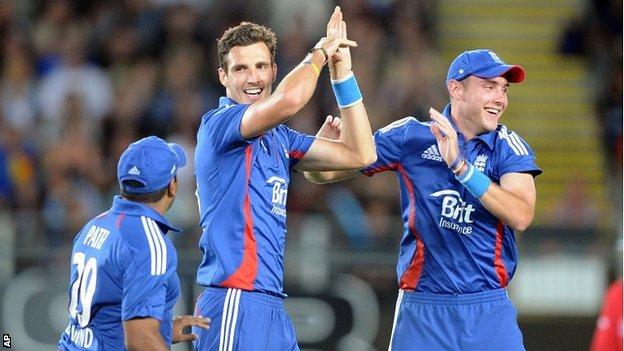 Stuart Broad has described England's performance in their 40-run Twenty20 victory over New Zealand at Eden Park as the best of his captaincy.

"It is certainly the most complete performance that I've captained," said Broad, who has led England in 15 games.

"To have the mindset to go and get such a high score and defend it so comprehensively - we are delighted."

England took advantage of the short straight boundaries at a stadium more commonly used for rugby to plunder 15 sixes and 16 fours in their total, with all of the top six batsmen contributing at least 21 runs.

The Black Caps could only manage eight sixes and 11 fours as they lost wickets at regular intervals to fall well short of their target.

"To go and get 214 and keep going with the freedom we did meant it was all set up for the bowlers, and the fielding was excellent too," added Broad, whose career-best figures of 4-24 made him England's leading T20 wicket-taker with 52.

"We talked at half-time about bowling to the bigger boundaries, bowling to a length and taking pace off the ball and we did that fantastically well.

"We are often very critical of ourselves and set ourselves high standards, but we have to sit down in that changing room today and say that is fantastic."

New Zealand were let down by five dropped catches, including two by Ross Taylor, who received a warm reception on his first appearance since being relieved of the captaincy and then sitting out the tour of South Africa.

"It's was good to get back out there. The reception I got when I came out to bat was very humbling. Thanks to the fans for all your support. Sorry about the dropped catches too.

"We were missing the basics - the batting, the bowling and definitely in the field," said new captain Brendon McCullum.

"We have to make sure we rectify those areas. It was a really poor day in the field and you can't afford to drop five catches in any form of the game, let alone Twenty20 cricket.

"It was disappointing to put in that sort of performance in front of that sort of crowd. We got exposed in some areas but credit to England for the way they played."

The teams meet again in Hamilton on Tuesday with Broad knowing a win would wrap up the three-match series with a game to spare.

"We'll have to adapt to conditions in Hamilton but we know there will be short boundaries again and it's just important that we keep pushing ourselves and make sure that our performance there is as good as it was here," he said.