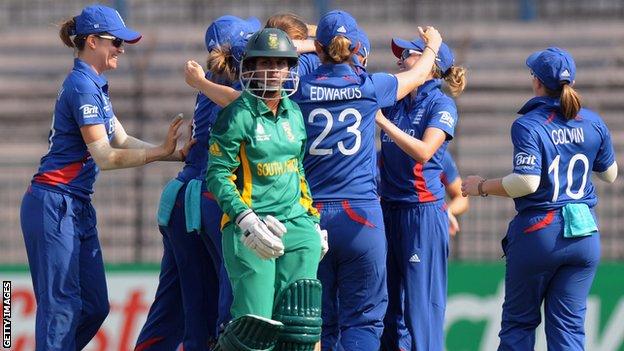 With England needing victory to stay in the tournament, Shrubsole bowled 10 overs unchanged to rip through the South Africa top order.

Danielle Wyatt's 3-7 mopped up the tail to dismiss the Proteas for only 77 in Cuttack.

"Looking at the tournament as a whole, England might not have wanted to bat first because of the early morning dew when they won the toss. Let's hope they can do enough against New Zealand to get to the final."

With net run-rate in mind, England lost three wickets - including Sarah Taylor for a third successive duck - in looking to complete a swift chase before being taken home by Lydia Greenway and Arran Brindle with more than 40 overs to spare.

Charlotte Edwards's side now need to beat New Zealand in Mumbai on Wednesday, but the other criteria for their passage to the final will be determined by the outcome of the Kiwis' match against West Indies on Monday.

If the Windies win, England will need Australia - who booked their place in the final by beating Sri Lanka - to beat the Caribbean side in their final Super Six game.

A New Zealand victory would mean England need to beat the White Ferns by a margin that takes their net run-rate past that of the Kiwis and the Windies.

That England still have a realistic chance of making the final is largely down to Shrubsole, the tournament's leading wicket-taker.

She followed up fine performances against West Indies and Australia by destroying South Africa for career-best figures and the sixth-best return by any England bowler.

Edwards, her decision to field first vindicated, opted to bowl Shrubsole out and was rewarded when the Somerset seamer struck again, this time clipping the bails of Marizanne Kapp.

With left-arm spinner Holly Colvin having Shandre Fritz held at point and Shrubsole's new-ball partner Katherine Brunt switching ends to pin Chloe Tryon leg before, it was left to Wyatt to wrap up the innings.

The off-spinner had Shabnim Ismail caught behind, Sunette Loubser well taken low by Edwards at mid-off then held Marcia Letsoalo off her own bowling for her best ODI figures.

Shrubsole's five of the best

Anya Shrubsole's figures (5-17) are the sixth best by an England bowler in women's one-day internationals. Only one England bowler has taken more than five in an innings, Jo Chamberlain's 7-8 against Denmark in 1991

Conscious that a swift run-chase would be key to England's chances of reaching the final, Wyatt and Edwards raced after the target, with Wyatt peppering the off-side boundary.

But aggression would prove their downfall, as Edwards slashed Kapp to third man and Wyatt flat-batted Tryon to mid-on.

The situation looked ideal for Taylor to register some confidence-boosting runs after two first-ball ducks.

However, the wicketkeeper, who had been linked with a move to men's cricket before the tournament, again fell without getting off mark, bowled playing across the line to left-armer Tryon.

England had lost three wickets for three runs to slip to 26-3, but experienced duo Greenway and Brindle combined to ensure there were no more alarms.

With Brindle playing some eye-catching cover drives and Greenway looking to hit through the on side, they ensured that England's continued defence of the trophy they won in 2009 will go down to the final round of Super Six matches.