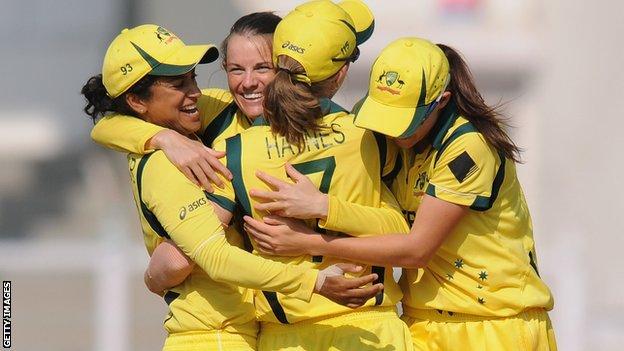 Australia reached the final of the Women's World Cup with a nine-wicket victory over Sri Lanka in Mumbai.

Jodie Fields's side, who have won all five of their matches in the competition, reached the final, to be held on 17 February, with a game to spare in the Super Six stage.

Erin Osborne took 3-9 while Megan Schutt and Lisa Sthalekar picked up two wickets in Sri Lanka's 131 all out.

Rachael Haynes then smashed an unbeaten 71 as the Aussies raced to victory.

It means the Southern Stars are certain to qualify for the final in Mumbai ahead of their final Super Six game against West Indies on Wednesday.

Defending champions England, New Zealand and West Indies are the three sides still in contention to join the Aussies in the final.

Meanwhile, Sri Lanka are eliminated from contention and look set to face South Africa in the fifth/sixth place play-off on Friday, no matter what the result is when the two sides meet on Wednesday.

England, who beat South Africa by seven wickets on Sunday, must beat New Zealand in their final match on Wednesday to have any chance of defending their title against the Aussies.