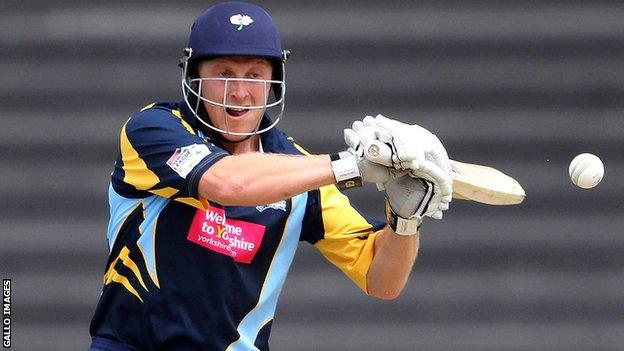 Yorkshire captain Andrew Gales is to pay his own way to attend a pre-season training camp in Sri Lanka.

Rather than take a scheduled week off, the 29-year-old left-handed batsman has decided to join six of his colleagues on the trip to Colombo next week.

"I see it as an investment in my career, I felt I'd benefit from some extra sessions outside," said Gale.

He will join fellow first-teamer Jack Brooks and five members of the club's academy in the camp.

Nothing beats playing and practising outdoors

Although Yorkshire won promotion by finishing second in Division Two of the County Championship last year, Gale himself had a disappointing season, scoring 481 championship runs at an average of 32.06 and failing to make a century in 18 innings.

"From my point of view, I want to get into the nets in outdoor conditions and start hitting some balls," Gale told the Yorkshire website.

"The indoor facilities at Headingley are excellent, but nothing beats playing and practising outdoors and we'll be netting from 8.30am right through to early evening.

"It will be pretty intense, but ideal preparation for me and the guys. I will focus on batting against spin and improving my specifics in that area of my game."

The camp has been organised by second team coach Paul Farbrace, a former assistant coach to the Sri Lanka Test side.

"Our batsmen will be able to take their winter indoor sessions to batting on grass wickets in excellent conditions. This was one of the reasons why Andrew Gale wanted to attend," said Farbrace.

"For the bowlers, in particular Jack Brooks who didn't play much cricket during the second half of last season, they will be able to get in the nets and have long sessions getting back to some proper bowling fitness.

"We want Jack [Brooks] to hit the new season fully prepared and become one of our main strike bowlers as we aim for success on all fronts."

Gale, Brooks and their younger colleagues will return home at the end of the month to prepare for Yorkshire's pre-season tour of Barbados, which begins on March 11.