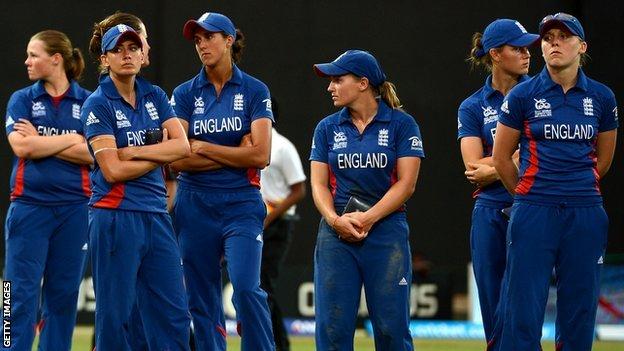 Defending champions England have been knocked out of the Women's World Cup despite a 15-run win over New Zealand.

West Indies beat Australia earlier to render England's result meaningless and put the Caribbean side through to meet the Aussies in Sunday's final.

"It will sink in now. You could see Charlotte Edwards' face. It's going to hurt, and hurt deep. Fine lines here, there and everywhere would have made a difference. Can they celebrate this win? It's an odd emotion, with the wider reality kicking in. If just one thing had gone wrong - like if the batting had been awful all tournament - they could go away and work on it, but when it was bowling, batting, fielding and captaincy, it will be hard to sit down. So many tweaks are needed. There were too many inconsistent performances and that is what has left England in this position now."

England have paid the price for two narrow defeats, the one-wicket opening loss to Sri Lanka in the group stages and a two-run reverse against Australia in the Super Sixes.

While Charlotte Edwards' England side can point to the fine margins, they will also know that dropped catches and poor batting cost them in both those games.

After that loss to Australia, England looked all but out, only for their hopes to be revived by a thumping win over South Africa and West Indies' surprise victory against New Zealand.

They still needed help from the Aussies and for long periods it looked as though Jodie Fields' side would keep their end of the bargain as they reached 130-4 in pursuit of 165.

However, a collapse of four wickets for 10 runs would eventually leave Australia eight short, handing West Indies their first win over the Southern Stars and a place in their maiden World Cup final.

England's fate had been sealed just after Taylor walked to the crease, replacing Danielle Wyatt, who had shared an opening stand of 59 with Edwards.

Taylor, who had been linked with a move to men's cricket before the tournament, would have registered a fourth successive duck had she not been dropped by Lucy Doolan at deep square leg.

But she showed the class that had deserted her in India, playing down the ground and in front of square on the leg side to hit 16 fours and one six in her 79-ball stay.

Even though Edwards slapped Nicola Browne to point to end a composed innings of 54, Taylor found an ally in Lydia Greenway for a third-wicket stand of 59.

The wicketkeeper had another slice of luck when caught off a no-ball, but her fortune ran out when she drove Browne to mid-off.

"England would have prided themselves on their fielding but some of the catches that have gone down in the games they have lost have been crucial. The batting, with Sarah Taylor making three ducks on the trot, has not been as good as expected. Apart from Charlotte Edwards' century against India, nobody has come in and made a really big score."

England looked to have lost their way, only for the late hitting of Jenny Gunn and Heather Knight to take 38 off the final four overs.

However, with England robbed of the services of ill opening bowler Anya Shrubsole, the Black Caps looked to be in charge as Bates and Satterthwaite built an impressive second-wicket partnership.

The key moment proved to be the wicket of Bates, the tournament's leading run-scorer, bowled around her legs by the impressive Gunn.

Wickets then fell at regular intervals, thanks largely to the catching that had previously let England down.

Satterthwaite was held by Edwards off Wyatt soon after completing a century, with Holly Colvin's 3-48 chipping through the middle order.

With the contest effectively over, the game meandered to a conclusion, with both sides set to return on Friday to do it all again.

South Africa and Sri Lanka also meet again on Friday for fifth place, the Proteas having secured a 110-run win in Cuttack.