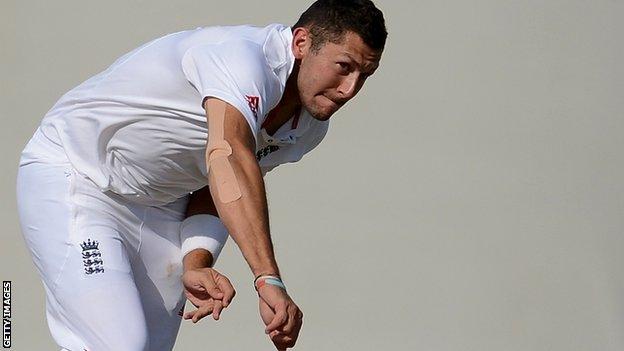 England bowler Tim Bresnan may miss the start of the English cricket season following an operation on his injured right elbow.

A statement from the England and Wales Cricket Board said Bresnan faces "six to eight weeks" of rehabilitation work.

England's domestic schedule begins when they face New Zealand in the first Test at Lord's on 16 May.

"Tim Bresnan has undergone an uncomplicated operation on his right elbow to remove extra bone and scar tissue," said the ECB.

"Bresnan will now commence a six-to-eight week rehabilitation and back-to-bowling programme before returning to competitive cricket early in the summer."

The seamer had surgery on the same elbow in late 2011 and missed the subsequent Test series against Pakistan in the United Arab Emirates.

His most recent appearance came when he took four wickets in England's one-day international win over India on 27 January.