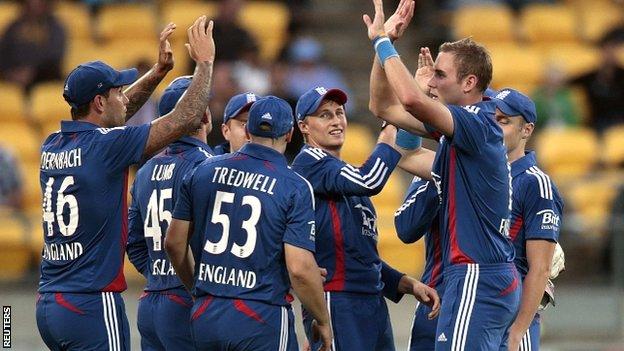 England stormed to a 10-wicket win over New Zealand in the deciding Twenty20 international to take the series 2-1.

Hales, whose innings comprised just 42 balls, dispatched three sixes and a four in four deliveries and Lumb won the match with a six out of the ground.

Broad admitted he made a mistake electing to bowl first in Hamilton, where his team collapsed to a 55-run defeat, but the previous four internationals at Wellington had all been won by the chasing side and fielding soon proved the correct decision.

On a ground known as the Cake Tin, Broad and Steven Finn found plenty of spice and lift from the drop-in surface, Broad breaking through with a fast, accurate short ball that was to be the recipe for all three of his wickets.

That brought the dangerous Brendon McCullum to the crease in the fourth over, the man who destroyed England in Hamilton with 74 from 38 balls, and he thumped Dernbach's opening delivery ruthlessly through mid-off for four.

But he fell to the spin of James Tredwell, who conceded 11 in his first over but returned to have the New Zealand captain smartly caught on the mid-wicket boundary by Jonny Bairstow.

Far from disheartened, the crowd cheered the returning local hero Ross Taylor, banners suggesting him for Prime Minister, and he delighted them with a slog sweep for six in off-spinner Joe Root's first over.

But he attempted the same stroke to the next ball, delivered slightly wider of off-stump from Root, bowling around the wicket, and with the boundaries subtly larger than in the previous two games, Taylor was caught on the mid-wicket rope, again by the safe hands of Bairstow.

"The bowlers set it up, to restrict New Zealand to 139 was fantastic. Hales came out swinging and got the job done in double quick time. None of the matches have been close have they?"

Four overs elapsed without a boundary, Root's inclusion at the expense of Samit Patel also providing extra vitality for England in the field, and only three sixes were scored in the innings.

Opener Martin Guptill was the only New Zealand batsman to pass 30, his determined 59 from 55 balls ended by Broad in the penultimate over, before Dernbach collected two wickets in the final five deliveries.

The tone of the England reply was very different although it was aided at times by some errant bowling and fielding.

Lumb hit successive sixes in two balls in the fourth over while Hales, dropped in consecutive overs when on six and 11, clinically dispatched three fours in the next.

With only 11 overs gone they had reduced their requirement to a mere 24, and New Zealand's travails continued with a fumble from Nathan McCullum at the bowler's end when he should have run Lumb out.

Hales displayed some savage hitting, particularly on the leg-side, passing fifty for the fifth time, and he has now been involved in England's three highest T20 partnerships.

His Nottinghamshire team-mate Lumb won the match in style with a flick off his legs that bounced off the roof as England made the highest second innings score without losing a wicket in T20 international history, putting them in fine fettle for the three-match one-day international series beginning in Hamilton on Sunday.

The England and Wales Cricket Board announced that Dernbach and Tredwell have received incremental contracts for the 2012-13 campaign.

Contracts are automatically awarded once a player reaches 20 points in a 12-month period, with five points for a Test appearance, and two for a one-day/T20 game.