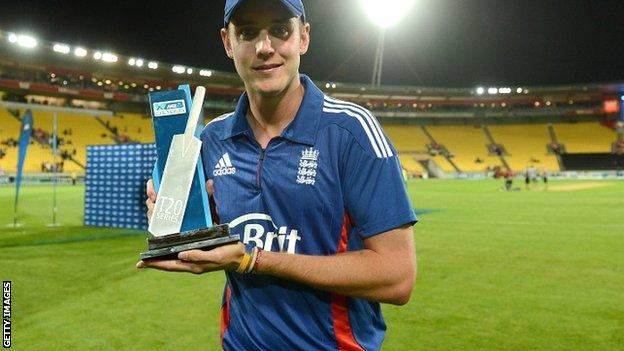 Skipper Stuart Broad was in jubilant mood after England's emphatic 10-wicket victory in Wellington gave them a 2-1 Twenty20 series win over New Zealand.

"It was a pretty special win, probably the most powerful I've been involved with in an England team," Broad said.

"We were brilliant and hopefully we can continue that throughout the tour."

Having succumbed to a crushing 55-run defeat in Hamilton on Tuesday, when Broad admitted he made the wrong decision to bowl first, England responded impressively for only their second 10-wicket victory in their 58 T20 internationals.

"It was a good wicket, quite a big consideration at the toss, especially after the last game, but I think we got that right and the way the bowlers set the tone was fantastic, we gave no freebies away, we were really tight with our lines, we bowled quick and our fielding was superb," Broad enthused.

"In the last two weeks our fielding has been right up there.

"I don't think any of us would have seen us chasing it down in that sort of fashion, Alex Hales and Lumby showed a fantastic amount of experience to know what balls to go for.

"What a fantastic way to finish the first part of this tour, we've got a long way to go but we came here to win this series against a very good New Zealand Twenty20 team and we've managed to do that."

Broad now returns to the ranks under the leadership of Alastair Cook for a three-match one-day international series against the Kiwis beginning on Sunday.

"Obviously the confidence we'll have gained we can lead into the one-day squad and make sure we hit the ground running," he said.

"We were excellent with the lengths we bowled, we didn't really get driven down the ground and we bowled a fantastic line with that.

"The bowlers set it up, to restrict New Zealand to 139 was fantastic. Hales came out swinging and got the job done in double quick time. None of the matches have been close have they?"

"As a bowler you feed off the power the fielders give you and I think we've got a really powerful fielding unit, the guys are taking their catches, making great diving stops.

"They look hungry to be out there, that's what you want as a captain, and it has been a pleasure to captain the guys over the last few weeks."

Hales made an uncertain start, dropped on six and 11 in successive overs, but his captain said: "It just shows you can bide a bit of time in T20 cricket, we got used to the pace of the wicket early, Alex Hales probably faced 10 balls before he hit one out of the middle and then there was no stopping him.

"We were obviously disappointed the other night to have lost but that can happen in Twenty20 cricket. We talked about how we wanted to win this game and it went just about perfectly."

Hales, 24, who has now made five T20 half centuries in his 17 matches, admitted: "At the start I didn't really know where any runs were coming from but we stayed positive and knew we'd be able to catch up."

The Nottinghamshire batsman is yet to play a one-day international, added: "Playing at the top of the order in any game there is pressure on you, your aim is to get the innings off to a good start and Lumby did an outstanding job as well.

"I've got ambition in the other two forms of cricket as well so I've still got a lot of hard work to do."