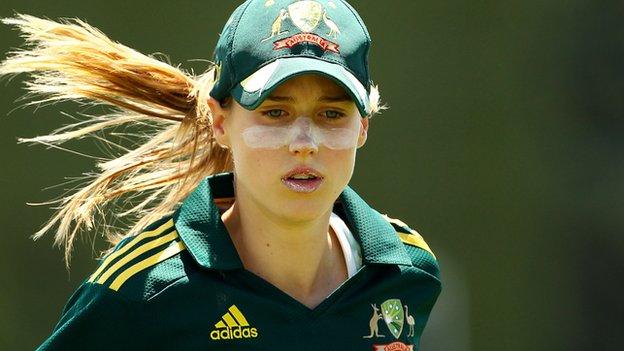 If an emerging sport needs a star to help raise its profile, then women's cricket has struck gold with Ellyse Perry.

An international in both cricket and football, the 22-year-old also somehow manages to find time to present shows on radio and television as well as studying for an economics and social sciences degree.

Throw in the girl-next-door looks, a permanent smile and a knack for being word perfect in front of the media and it is clear why Perry is one of the most famous women in Australia.

"I've been really fortunate that both cricket and soccer have been receptive to my situation and also so supportive of it," the fast bowler from Sydney told BBC Sport.

At 16, Ellyse Perry became the youngest person - male or female - to represent Australia at cricket. Within a month, she also made her bow for the Matildas, Australia's women's football team.

"I just always went along with the flow. So far it's worked out fairly well and I'm really fortunate to be in that position, but in a lot of ways that's because of the things other people have done to support me."

At 16, Perry became the youngest person - male or female - to represent Australia at cricket. Within a month, she also made her bow for the Matildas, Australia's women's football team.

A central defender, Perry was part of the squad that reached the quarter-finals of the 2011 World Cup, scoring in their 3-1 defeat by Sweden.

But it is in cricket where she has earned most success. With a classic action that generates genuine pace, Perry is already an Ashes and double World Twenty20 winner, and looks set to recover from an ankle injury in time for Sunday's World Cup final against West Indies.

The balancing act between cricket and football has not always been straightforward, though.

Last year, a clash between the domestic football finals and Australia's one-day series with New Zealand led to Perry's Canberra United coach giving her an ultimatum between the two sports.

Even that didn't entirely solve the problem. Shortly before leaving for the World Cup in India, Perry was faced with the dilemma of new football club Sydney FC's W-League semi-final and New South Wales's Twenty20 final being on the same day. On that occasion, she chose football.

With the prospect of these decisions recurring, Perry is realistic about the possibility of one day having to make the ultimate choice between the two sports. However, with a maturity that has perhaps come from years of fielding the same question, she can see positives in being forced to make that call.

"What's exciting about the landscape of not only women's cricket and soccer, but also women's sport in general around the world is that it's evolving and developing, becoming more professional and more demanding of our time," said Perry. 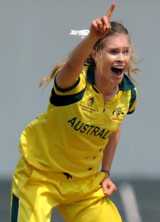 When Perry was ruled out of Australia's game against England, her place was taken by 17-year-old Holly Ferling.

"Ellyse is my hero," said Ferling. "I've always looked up to her. To do what she's done at such a young age is an incredible feat."

"If that means that it's not possible to play both then I see that as a good thing.

"But I probably consciously made the decision not to think too much about that until it's absolutely necessary."

While Perry is relaxed about any big decisions that could lie in the future, both Cricket Australia and the Football Federation Australia would be loath to lose such a star.

Everything about her brings priceless PR.

"The Ellyse Perry brand is fantastic," said former Australia batter Mel Jones. "She's lovely, clean-cut and very skilled. She's a fantastic girl and both sports would want to keep her.

"Her profile gets people talking about women's sport - they know the Matildas or the Southern Stars are playing, and that filters down to domestic level as well.

"Whether you agree with it or not, both sports are getting the benefits, which is a good thing."

And, if there is indeed a Perry "brand", then she herself knows the important role she plays in being an ambassador for women's sport.

"Recognition of female athletes has increased, encouraging young girls to have positive and healthy lifestyles," she said.

"There's a lot in modern-day society that reflects an increased importance of having a healthy body image, feeling confident about and respecting yourself.

"Women that achieve wonderful things are important in that and all of us have a role to play."

The high profile and the ability to not stumble over a single word when placed in front of a microphone made Perry's move into the media an inevitable next step.

She has had a regular segment on the Triple J radio station focusing on sport and a TV show unearthing new football talent.

"I don't know how great I am at them but it's great to have the opportunity," she said with no hint of false modesty, before explaining that her university studies are "an escape that provide a bit of balance".

"In the future, when I'm old and can't run any more then I'll have something to fall back on."

Australian cricket will hope that age is the only thing that could eventually rob them of Perry's services, rather than the necessity to choose between her sports.

They have, however, already formulated a back-up plan, in the shape of Holly Ferling.

When Perry was ruled out of Australia's game against England, her place was taken by the 17-year-old. Tall and quick, Ferling is a virtual Perry clone.

"She's my hero," said Ferling after taking 3-35 in the Aussies' two-run win over their old enemy.

"I've always looked up to her. To do what she's done at such a young age is an incredible feat and I don't think it will ever be done again."

And what about being compared to her idol? "Well, I wear a bow and my hair's curly," she joked.

Come Sunday, Australia could be holders of the World Cup, World Twenty20 and the Ashes. In Perry and Ferling, they have two of the fastest bowlers in the women's game and two poster girls of the sport.

The rest of the world can only look on in envy.