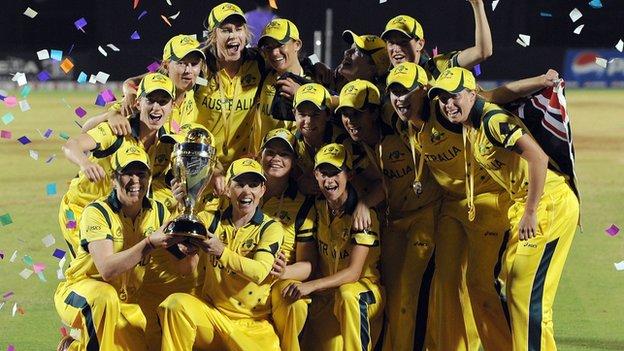 Ellyse Perry ripped through the West Indies top order to help Australia to a 114-run win in the Women's World Cup final in Mumbai.

With the Windies chasing 261, pace bowler Perry took a wicket in each of her first three overs to reduce the Caribbean side to 41-3.

Merissa Aguilleira and Deandra Dottin briefly threatened some fireworks, but after both fell to Lisa Sthalekar, West Indies limped to 145 all out.

Rachael Haynes (52) and Jess Cameron (75) had earlier made half-centuries for the Aussies, with some late-order hitting from Perry and Jodie Fields taking them to 259-7.

By contributing with the bat and then starring with the ball, Perry made a dramatic return to the Southern Stars' line-up after three games out with an ankle injury.

The last of those was an eight-run defeat by West Indies, their first win over Australia and the result that sealed their place in a maiden final.

Because of that victory, Windies skipper Aguilleira said her side had a "psychological advantage" over the team that had lifted the trophy on five previous occasions.

But Australia were too clinical for a West Indies side that were sloppy in the field, wayward with the ball and unable to keep up with the run chase.

In reclaiming the trophy they last won in 2005, Australia add to the World Twenty20 they won in October and the Ashes they will try to defend in England in August.

It is the first time they have held all three of women's cricket's major titles simultaneously.

Only once in the match were they under pressure, as four wickets fell for 28 runs around the batting powerplay.

"If an emerging sport needs a star to help raise its profile, then women's cricket has struck gold with Ellyse Perry. An international in both cricket and football, the 22-year-old also somehow manages to find time to present shows on radio and television as well as studying for an economics and social sciences degree."

Read the rest of our feature

Before that, Haynes, who added 52 for the first wicket with Meg Lanning, shared a second-wicket stand of 64 with Cameron.

With fielding mistakes and ill-disciplined bowling hampering the Windies, powerful right-hander Cameron played some particularly eye-catching strokes, going past 50 with two sixes in one Tremayne Smartt over.

By this point, Haynes had been well held by Kyshona Knight, running back at mid-wicket to give impressive leg-spinner Shaquana Quintyne her first wicket, and Alex Blackwell had fallen cheaply to Smartt.

Cameron dominated a fourth-wicket partnership of 55 with Sthalekar but, when Cameron slapped a Shanel Daley full toss to deep mid-wicket, Australia lost their way.

With the bowlers finally able to gain some control, Sthalekar, Sarah Coyte and Erin Osborne all found ways to hole out to West Indies fielders.

However, from 209-7 Fields and Perry combined to add 50 exactly, Perry hitting a maximum over long on and skipper Fields improvising with sweeps and pulls.

The Windies batters were always likely to have to deal with movement in the Mumbai night, but openers Natasha Mclean and Kycia Knight looked comfortable until the introduction of Perry.

With no small sense of theatre, the right-armer twice aborted attempts to bowl her first delivery before trapping Knight lbw with a delivery that would have missed the left-hander's off stump.

Limping between overs, Perry then had the dangerous Stefanie Taylor caught and bowled, pinned McLean plumb in front and finished with figures of 3-19.

After Knight retired because of a quad injury, Aguilleira and Dottin counter-attacked, the former sweeping Osborne into the stands and the latter twice taking Coyte over the leg side.

But both were bowled as Sthalekar found turn with her off-breaks, the wicket of Dottin effectively ending the contest.

Sthalekar wrapped the match up when she took a spectacular one-handed catch at short mid-wicket to dismiss Smartt off the bowling of Julie Hunter.

Megan Schutt finished with figures of 2-38 as she passed England's Anya Shrubsole as the highest wicket-taker in the tournament with 15.