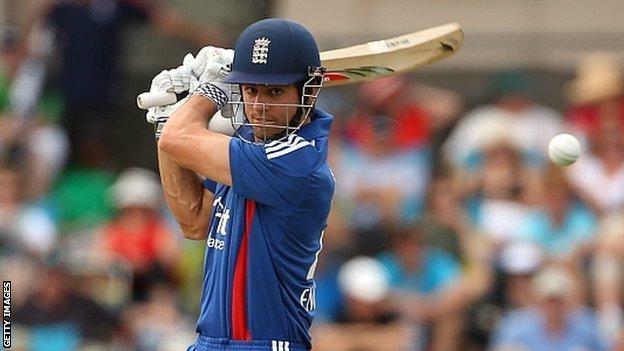 England captain Alastair Cook conceded his side were rusty in their defeat by New Zealand in the first one-day international in Hamilton.

Skipper Brendon McCullum hit 69 not out as the hosts chased down England's 258 with seven balls to spare.

"You always are a little bit rusty when you haven't had a practice match or a training session as a side," said Cook.

"But it was more match hardness which we were missing a little bit today. We got ourselves in position to win."

England appeared to be on course for victory at several stages but McCullum and Martin Guptill (27 not out) carried the Black Caps to victory in the first encounter of the three-match series.

"That was a very impressive win, England's bowling plans were odd, they haven't bowled much in these conditions, they've been used to the sub-continent, but there was a lot of short stuff flying around.

"It is difficult with these new field restrictions but New Zealand played really well."

"We just kept losing wickets at crucial times and never really got the partnership towards the end of the innings which could have got us up to 280 or 290," said Cook.

"We batted well up front, but probably loaded a little bit too much towards the end - put a bit too much pressure on our big hitters.

"I think both sides would have felt disappointed losing that game.

"Both sides got themselves in position to win and someone had to stand up and grab it by the scruff of the neck - and those two did it for New Zealand."

New Zealand captain McCullum said: "To see Martin coming out and being able to strike the way he did was fantastic.

"I thought we showed some fighting characteristics. It's a really important trait for us that we do keep scrapping like that."

In defeat, James Anderson took his 529th international wicket, surpassing Ian Botham as England's highest wicket-taker in all forms of the game.