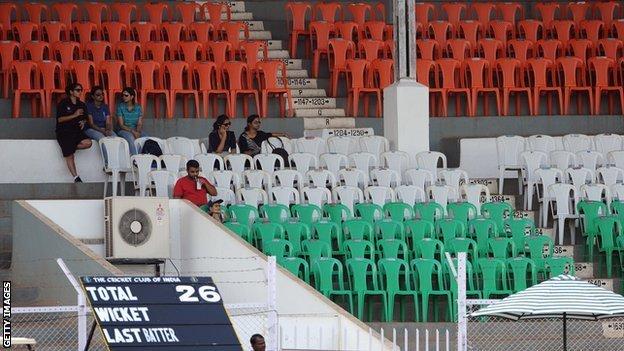 The event in India has faced criticism over scheduling, promotion and spectator facilities, in comparison to the 2009 tournament in Australia.

Richardson told BBC Sport: "If that is the perception then I'd be concerned.

"From an ICC perspective, the commitment to women's cricket has increased since 2009."

He added: "The budget is bigger for this event and the feedback to us is that people have started to sit up and take notice of the women's game."

The build-up to the competition was marred by scheduling confusion, with the programme of matches not confirmed until six days before the opening match.

The entire event was also due to be held in Mumbai, but protests against Pakistan's presence in the city led to the eastern city of Cuttack, almost 1,000 miles away, being introduced as a second venue.

Facilities at grounds were criticised by family members of an England player, with an email seen by the BBC alleging that food and drink were only on sale to members of the BCCI, the son of all-rounder Arran Brindle was not allowed in the pavilion and that they "have not been welcomed at the tournament"

Further changes were made to the schedule when the Board of Control for Cricket in India (BCCI) opted to hold two men's domestic matches at the Wankhede Stadium in Mumbai, preventing the women from playing in the city's biggest stadium.

"The politics of Indian cricket is never simple and it was not our job to get involved in that," added Richardson, who became chief executive in June. "As long as we're getting a facility that had all the qualities we needed we would be happy.

"Perhaps in the eyes of the BCCI, women's cricket does play second fiddle to the men's game, that's the fact.

"Part of the struggle is to get them to realise the importance of the women's game in India, because that would rub off on the world game."

Matches in Mumbai were subsequently held at the BKC and MIG grounds, with England playing most of their matches at the Brabourne Stadium, the venue of the final.

Facilities at these grounds were criticised by family members of an England player, with an email seen by the BBC alleging that food and drink were only on sale to members of the Cricket Club of India (CCI), the son of all-rounder Arran Brindle was not allowed in the pavilion and they "have not been welcomed at the tournament".

"I'm disappointed to hear those kinds of stories," said Richardson "We never got to hear of those concerns until [the BBC] raised them with us.

"We would like to make sure in the future that doesn't happen again. We went out of our way in a number of incidents to ensure that people who came and watched, especially families of the players, were well looked after if we could.

"I also think the CCI would be disappointed to hear that because the intent wasn't to make anyone feel unwelcome, not at all."

The former wicketkeeper also addressed suggestions that not enough has been done to promote the event, with sparse crowds attending most matches despite all of them being free admission.

Little in the way of advertising has been seen around Mumbai, with merchandise, memorabilia and match-day programmes unavailable.

However, Richardson also underlined several positives from the 2013 World Cup, with an increase in global playing standards top of the list.

"The overall major success has been the apparent improvement of depth of quality of the teams," he added.

"England or Australia used to be pretty much guaranteed of winning everything, but we now have five or six teams that on their day can beat the other teams, which is tremendous for the women's game.

"[Bowling] has improved beyond recognition and [though] the bats might have improved slightly, they are hitting the ball hard and the fielding is tremendous."

The ICC chief also pointed out that television ratings for the World Cup had been "beyond expectations" and that viewing figures from the opening two matches of the tournament were more than 10 times greater than in 2009.