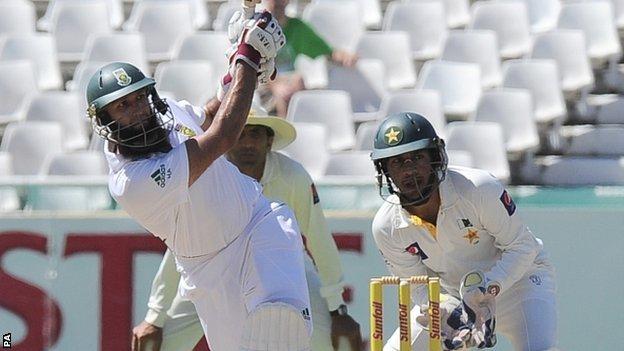 Saeed Ajmal's 10-wicket haul was in vain as South Africa beat Pakistan by four wickets inside four days to take a 2-0 lead in the three-match series.

Pakistan lost their last six wickets for 22 runs before Hashim Amla (58) guided the Proteas to victory.

Off-spinner Ajmal finished with figures of 10-150, his third 10-wicket haul in Tests.

Fast bowler Vernon Philander was chief destroyer for South Africa, finishing with 9-99 in the match.

South Africa have now won their last six Test series, are undefeated in 12 and have not lost a match since December 2011, 14 games ago.

Pakistan were left to regret an opportunity missed after reducing South Africa to 109-5 in their first innings, having scored 338 themselves, with Younis Khan and Asad Shafiq both making 111.

The tourists began day four on 100-3 after Azhar Ali and Misbah-ul-Haq had battled through the evening session on Saturday to leave the game evenly poised.

A rush of blood saw Misbah depart in the ninth over of the morning when he was caught attempting to sweep spinner Robin Peterson.

Although the hosts lost wickets at regular intervals, they never looked under pressure chasing a moderate target, particularly after Graeme Smith and Amla added a quick 53 for the second wicket.