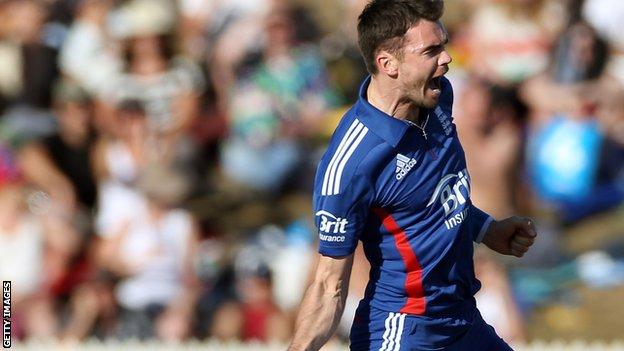 Anderson, 30, is now England's highest wicket-taker after surpassing Sir Ian Botham's total of 528 in all formats.

The Lancashire bowler dismissed BJ Watling in England's defeat to New Zealand on Sunday to set the new mark.

"It's a fantastic achievement to have that many wickets for England," said Woakes. "I'm sure he's got many years ahead of him too, to go even further."

Anderson made his England debut in a one-day international against Australia in Melbourne in December 2002, making his first Test appearance against Zimbabwe at Lord's the following May.

Watling became Anderson's 223rd victim in ODIs, to add to 288 Test wickets and 18 in Twenty20 internationals in an England career spanning just over a decade.

"To do that over the amount of years he's been playing is a brilliant effort," added Woakes.

However the Lancastrian looks unlikely to add to his T20 tally, having not played in that format of the game for England since November 2009.