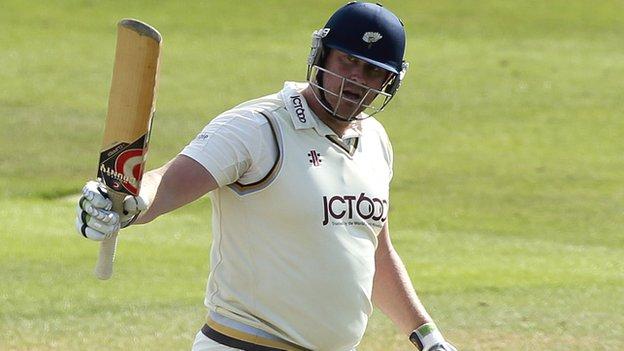 Yorkshire all-rounder Anthony McGrath has announced his immediate retirement from all forms of the game.

The 37-year-old former England Test player made more than 23,600 runs in all competitions and took 240 wickets.

He told the club website: "It's been an honour to have represented Yorkshire throughout my professional career.

He has given every ounce of blood, sweat and tears to the county and his role within the dressing room will be sadly missed

"I have been involved with this great club every summer since I was 12 and it is going to be difficult not having the opportunity to play again."

McGrath, who made his first-class debut in 1995, played in 257 first-class and 372 limited overs matches for the county, as well as four Tests and 14 one-day internationals for his country.

He helped the club win the County Championship in 2001 and went on to have two spells as captain, the second ending in 2009.

Last season, McGrath was part of the squad that won promotion back to Division One of the Championship.

Duncan Fletcher handed him his England Test debut against Zimbabwe in 2003 after an injury to Andrew Flintoff. That summer he featured in one further match against the Zimbabweans and two against South Africa.

His Test career ended there but he remained involved with the one-day side a little longer, the last of his 14 appearances coming against India in September 2004.

Yorkshire director of cricket Martyn Moxon praised the dedication McGrath showed during his time with the county.

"He has given every ounce of blood, sweat and tears to the county and his role within the dressing room will be sadly missed," Moxon said.

"He is the perfect role model for any aspiring junior wanting to be the best they can be. The way he inspires those around him is his distinct quality.

"I would like to wish him well in the future and hope that he will continue his connection to the club through his coach education qualifications and programme."