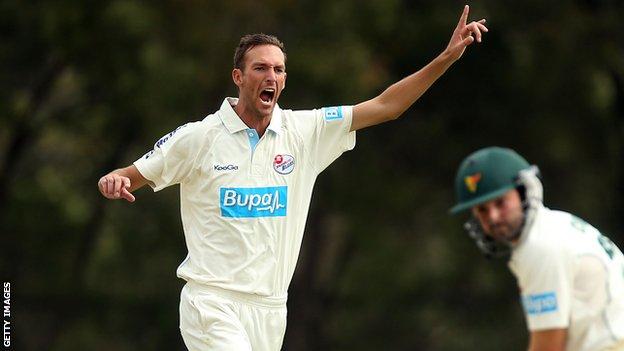 Northants have signed Australia international bowler Trent Copeland for the beginning of the new county season.

The 26-year-old seamer will arrive in time for their opening Championship game against Glamorgan on 10 April and stay with the club until 8 June.

Head coach David Ripley said: "He has a first-rate record in state cricket and we look forward to him shaping our season in the two months he's with us."

He performed steadily, taking six wickets at a cost of 37 runs each, but is seen as an outsider for Australia's squad for this summer's Ashes tour, with the selectors having blooded five other fast-bowlers in the Test side since then.

Ripley told the club website that Copeland, who stands at 6ft 4ins tall, was the first person approached by the club over the winter with a view to him filling one of their overseas player vacancies, but admitted it had "not been a straightforward journey" to signing him.

He continued: "Everybody I have spoken to about Trent - Michael Hussey, Cameron White and Matt Nicholson to name three, have been consistent with their opinion - skilful, accurate, long spells, should be perfectly suited to early season conditions in England and a top bloke."

Copeland will be available for seven Championship matches and six CB40 games before returning to Australia.