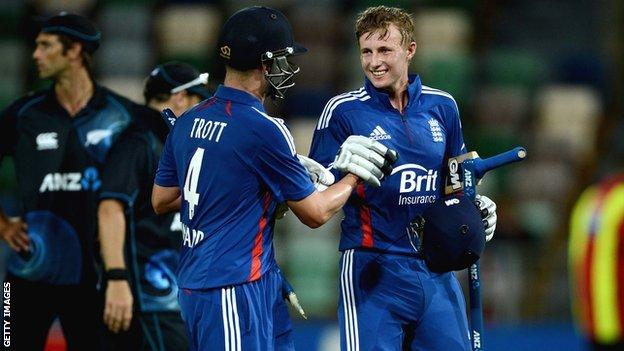 England strolled to an eight-wicket win over New Zealand in Napier to level the one-day international series at 1-1.

The tourists bowled tightly early on, but Ross Taylor (100) added exactly 100 in nine overs with skipper Brendon McCullum who smashed 74 from 36 balls.

The Kiwis were eventually bowled out for 269 as James Anderson took 5-34.

Root, 22, was only playing his 10th game for England across the three formats, but his 79 - from only 56 balls - may leave them with something of a selection headache when Kevin Pietersen, rested for this series, returns to the 50-over reckoning ahead of this summer's Champions Trophy.

Taking the attack to New Zealand after Cook and Bell had laid a solid platform, Root was dropped twice - on 25 as wicketkeeper McCullum, scampering towards short fine leg, failed to cling on to a top edge which sailed into the Napier night sky, and on 58 when Taylor shelled a straightforward chance at square leg.

Despite riding his luck, the young Yorkshire right-hander pulled, cut, drove and Dilscooped his way to the highest score of his brief England career, while Trott, who had attracted criticism for the pace of his innings in the first match in Hamilton, played the perfect anchor role at the other end, as both reached their half centuries from successive overs, and went on to add an unbroken 121 for the third wicket.

Lacking the control in their bowling attack usually provided by injured spinner Daniel Vettori, New Zealand found Root, in particular, difficult to contain and the game was up by the time he launched the first ball of the 48th ball for a huge six over square leg, added a two to level the scores, and drilled the winning run through the covers with 14 balls to spare.

Coach Ashley Giles will still be concerned that as in the first game in Hamilton, England had no answer to McCullum's power hitting, which looks perfectly suited to the last 15 overs following the International Cricket Council's recent change in regulations to reduce the number of permitted boundary fielders.

But an improved batting and bowling performance, with opening bowlers Anderson and Steven Finn impressive at both ends of the New Zealand innings, meant a repeat of the tied ODIs on this ground in 1997 and 2008 was never on the cards, with the teams now heading to Auckland for the series decider on Saturday.

After captain Cook won the toss, he combined with Anderson to remove both openers cheaply, with BJ Watling caught at slip and debutant Hamish Rutherford pouched at short cover.

Deposed captain Taylor, who averaged 71 from his nine previous one-dayers on this ground, helped himself to some early boundaries as seamer Chris Woakes struggled with his length.

Adding 72 with Kane Williamson (33) and 52 with Grant Elliott (23), Taylor took 81 balls to reach his first fifty, but that was the cue for him to break the shackles as he hoisted Stuart Broad over cow corner for six.

England also wasted their only umpire review after an unsuccessful lbw appeal from spinner Graeme Swann - who returned his most expensive one-day figures of 0-62 - when Hotspot showed a clear inside edge by Taylor.

Finn was bowling off a shorter run-up, apparently designed to stop him from disturbing the stumps with his right knee during his delivery stride, but he transgressed with the last ball of his eighth over as McCullum guided his first four through the covers, although dead ball was not signalled.

And the arrival of McCullum to join Taylor was the signal for the Black Caps to move up a gear, as they took advantage of McLean Park's short boundaries square of the wicket.

McCullum raced to his fifty from 26 deliveries, swiping Swann for a six over cover even as he slipped over attempting the shot, and blasting Woakes for a six and three successive fours in the 42nd over before he holed out at long-on.

Although Taylor's first fifty had taken 81 balls, his second only required 35 more, but after receiving a rapturous reception for reaching three figures, he fell to the next ball he faced, and Anderson wrapped up only his second five-wicket ODI haul as New Zealand were skittled with seven balls of their innings remaining.

Cook and Bell's measured opening stand was more orthodox than Taylor and McCullum's brutal assault, and like England before them, New Zealand unwisely wasted their only umpire review on a marginal lbw decision when they were desperate to break a partnership.

Bell had made 40 when he was hit on the pad trying to sweep off-spinner Nathan McCullum, who persuaded his captain and brother to call for a review, but the impact was outside the line of off-stump.

The Black Caps had tried six bowlers by the time Bell slog-swept part-time spinner Williamson and was caught on the mid-wicket fence in the 20th over.

Cook, who hit Nathan McCullum for only his sixth six in 63 ODIs, looked on course for a century before he poked a return catch to Tim Southee with England 149-2 in the 32nd over, and the game still in the balance as Root joined Trott, but the third-wicket pair ensured the series remains alive.