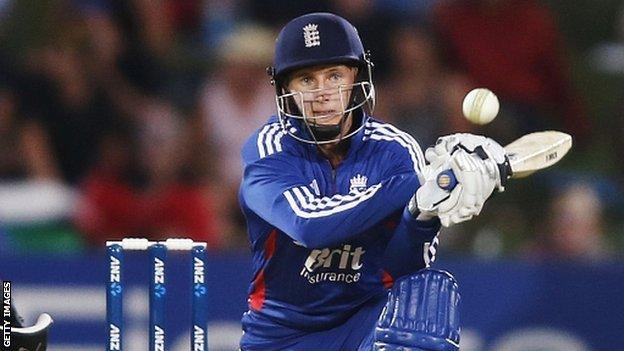 England captain Alastair Cook praised Joe Root after the Yorkshire batsman led his side to an eight-wicket win over New Zealand in the second one-day international in Napier.

"He keeps his feet on the ground, works very hard and has the right temperament for international cricket."

Cook, who made 78 at the top of the England innings, added: "He's adapted very well to new roles.

"He opens the batting for Yorkshire in four-day cricket, he's batting at six for us in Test matches and batting in the crucial position of four in one-day matches. He's done incredibly well."

Root, who hit seven fours and two sixes, is the first England player to pass 30 in his first six ODI innings.

Cook also lauded the performance of England's record wicket-taker James Anderson, who took 5-34 as the hosts were dismissed for 269.

"You know Jimmy is going to bowl pretty well pretty much every time," said Cook.

"It was a pretty strong wind and he bowled all his overs into that wind, so it was a great effort."

Meanwhile, Cook said the fact the only time in the match that Steven Finn broke the stumps during his delivery stride the ball went for four was proof it was not a distraction to batsmen.

Finn has had two international wickets chalked off when the umpire ruled a dead ball after Finn disturbed the bails at the non-striker's end.

Fast bowler Finn has been working on the problem with bowling coach David Saker and took 1-33 on Wednesday.

"And that ball that went for four shows it doesn't distract the batsman that much."

New Zealand captain Brendon McCullum said his side's total was "probably 20 runs under par", despite his 74 from 36 deliveries and Ross Taylor's 100.

"At 270, I thought we still had a chance if we got early wickets but we weren't able to get them," said McCullum.

"And they played brilliantly to knock off 270 reasonably comfortably."