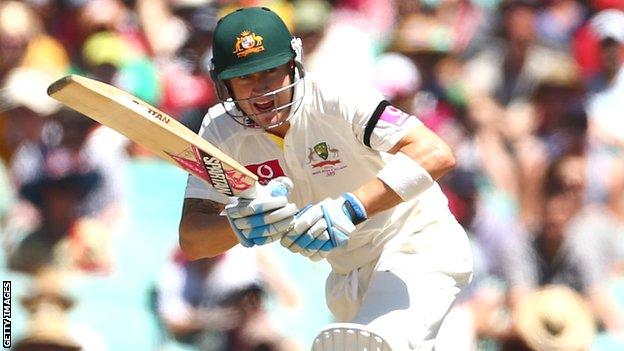 Australia captain Michael Clarke struck an unbeaten 103 to guide his team to 316-7 after the opening day of the first Test against India in Chennai.

Clarke hit 12 boundaries and completed his 23rd Test century in the final over as the tourists recovered from 153-5.

He shared 151 for the sixth wicket with debutant all-rounder Moises Henriques, who made 68 before becoming spinner Ravichandran Ashwin's sixth victim.

Ashwin finished with 6-88 after Australia chose to bat first.

David Warner and Ed Cowan gave their side a fluent start with 50 from the first 10 overs.

Ashwin, playing his first Test on his home ground, was introduced after eight overs and with his third delivery had Warner spilled on 18 by Virender Sehwag at slip.

In Ashwin's next over Warner survived a stumping chance when wicketkeeper Mahendra Dhoni was unable to collect a sharply turning delivery.

Cowan hit Harbhajan Singh, playing his 100th Test, for six down the ground and in the next over attempted a similar stroke, but was comfortably stumped by Dhoni for 29.

Phil Hughes (6) got an inside edge on to his stumps and in the first over after lunch Ashwin trapped Shane Watson lbw on the back foot for 28.

In his next over Ashwin pinned Warner lbw on the back foot for 59 and midway through the afternoon session the spinner recorded his sixth five-wicket haul when Matthew Wade (12) played down the wrong line and was also leg before.

Clarke displayed neat footwork to hit Ravi Jadeja for successive boundaries but on 39 he survived a catch at short-leg when replays indicated an inside edge, with no decision review system in place to contest umpiring decisions.

In the first over after tea Clarke skipped down the wicket to loft Ashwin over long-on for six, and Henriques also quickly settled in the final session, hitting three fours in six balls, before bringing up his half-century from 101 deliveries.

The partnership was ended late on when the 26-year-old Portuguese-born Henriques was trapped in front after missing a sweep at Ashwin.

Mitchell Starc was bowled by Jadeja in the next over to end the crowd's hopes of a 10-wicket haul for Ashwin, but Australia finished on a positive note as Clarke hammered Jadeja over mid-off for his 11th four to record a well-deserved third Test hundred on Indian soil.