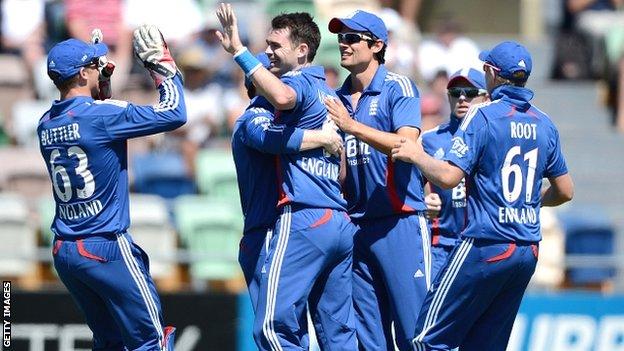 England will seek their first one-day series win against New Zealand since 1994 in the deciding match of the series in Auckland on Saturday.

Alastair Cook's team ended a run of five one-day international defeats against the Kiwis in the last match, winning by eight wickets in Napier.

New Zealand's Martin Guptill and Mitchell McClenaghan are both injured.

England hit 15 sixes in a record total in the Twenty20 match in Auckland and another high-scoring match is expected.

The tourists took advantage of the short boundaries at Eden Park, firing 214-7 from their 20 overs two weeks ago, and two players who scored heavily in that match are certain to play on Saturday.

Eoin Morgan struck three sixes in 46 and Jos Buttler added an unbeaten 32 from 16 balls with two fours and three sixes.

The England batsman to impress in the 50-over matches has been 22-year-old Yorkshireman Joe Root, who has made successive half centuries and become the first man to score in excess of 30 in his first six one-day international innings.

"His power has improved within the last year alone," said England one-day batting coach Graham Thorpe, who worked with Root in the England Lions team.

"He's physically stronger than he was a year ago, and if you go back 18 months there wasn't that much of him.

"But he always had a good cricket brain. That's what I sensed about him as a batsman; he has good awareness, and that's what half the battle's all about - when to play certain shots."

England are likely to be faced with the issue of who to leave out when they meet New Zealand in a three-match home series from 31 May-5 June, with star batsman Kevin Pietersen expected to return for that series having been rested.

"It's great to have a world-class player who can come back into your side," Thorpe said.

"I always think competition is very important at this level, and to have young players putting senior players under pressure is a good thing as well - because then you get the best out of those seniors.

"If England want to be competitive in all three formats, then we need that depth."

The highest total made in a 50-over international at Eden Park is 340-5 by New Zealand, who overhauled Australia's 336-4 with eight balls remaining in February 2007.

Ross Taylor, who made 100 in his team's defeat in Napier on Wednesday, was the top-scorer in that match six years ago, firing 117 from 126 balls, but the Kiwis have lost three of their last four matches at the venue, winning 29 and losing 32 in total, with one no-result.