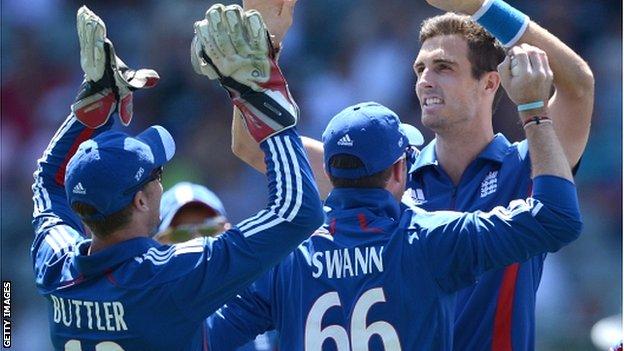 England captain Alastair Cook praised his opening bowlers after his team secured a 2-1 win against New Zealand in the one-day international series.

The tourists dismissed the Kiwis for 185 in Auckland and won by five wickets with 75 balls to spare.

Steven Finn took 3-27 with his shorter run-up and Cook said: "He's bowling well as well as I've seen him bowl.

"We're going to have to do it again in the Test series because the New Zealanders are very dangerous players."

Having also won the Twenty20 series 2-1, England now focus on a three-match Test series which begins in Dunedin on 6 March and Cook added: "If we're off our game they're going to punish us."

Asked whether victory in both shorter forms gives England a psychological advantage he said: "I don't know about that; if you have lost the one-day series you'll be saying it's a different format and you forget about it but we'll take a lot from this, we learned a lot about the Kiwis and they probably learned a lot about us as well.

"But our opening bowlers have had a lot of success against them and that can only hold us in good stead."

The deciding 50-over match was surprisingly low-scoring on the small Eden Park ground, Finn and Anderson reducing New Zealand to 11-3 in the eighth over.

Cook said: "It was a good toss to win because of what it gives you later but we were outstanding with that new ball again.

"Finny got the wickets and with Jimmy as well, for 15 overs we had an exceptionally high standard of bowling and put the Kiwis under a lot of pressure."

Commenting on Finn's reduced run-up, which he modified in an attempt to cure his problem of brushing into the stumps in his delivery stride, the captain said: "It was a surprise to me when he said he was going to pull it out in the second game.

"I hadn't seen him do much of it but just looking from first slip he's hitting the bat harder than he has been and obviously conserving a little bit of energy as well."

England lost Eoin Morgan and Jos Buttler in consecutive overs as they neared their target but Joe Root saw them to victory with an unbeaten 28 and he now has an average of 81 from his eight ODI matches.

"When you get close to the finishing line with short boundaries maybe that tempted us but it was pretty comfortable, I'm sure Jos or Eoin would like to have seen us home but in the end no-one really cares about that because we've won, when it comes to a series win you'll take any way.

"Joe Root played again in a slightly different style to the last game and showed he can adapt his game, which is what you need in international cricket."

First-choice players Anderson, Graeme Swann and Jonathan Trott all returned for this series having been rested for the 3-2 defeat in India, which was the first tour under new one-day coach Ashley Giles.

"In the eight games we've had under Ash, we've almost had two different squads here and in India so he's had to form relationships with the senior players who've come back in," Cook added.

"I think he'll be very happy with how it has gone. As a squad, we are starting to get used to him and he'll get used to us.

"We've got some tough selection calls to make on the XI but that's what you want as a captain and a coach because that competition for places is only a good thing.

"It's great that new guys have come in, I thought Chris Woakes has bowled very well, hit the areas we've asked him to extremely well, Joe Root will probably grab the headlines and Jos has kept very well and is only going to improve."