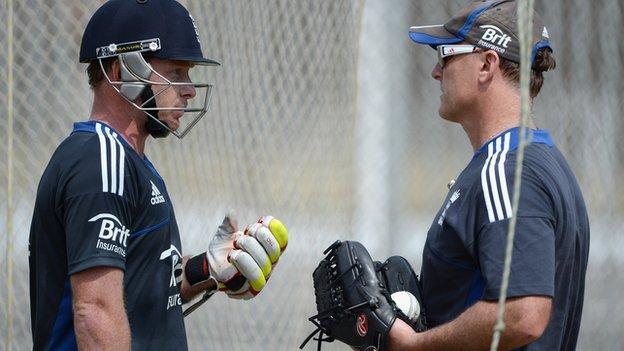 They begin a warm-up match at 21:30 GMT on Tuesday before the first Test against the Kiwis starts on 6 March.

Bell said: "Playing in New Zealand can be tough. We have to play well to win.

"Looking ahead it would be nice, having won in India, to win this series and it would give us nice momentum going into a big summer for us at home."

After their trip to New Zealand, England will host the Kiwis in Tests and one-dayers as well as compete in the ICC Champions Trophy on home soil before facing Australia home and away.

Ahead of such a busy schedule, 30-year-old Bell says the competition for places within the England squad can only be beneficial.

"As a group we have got so much cricket coming up in the next two years that you need a squad of players," said the Warwickshire batsman.

"Eleven players are not going to win that amount of cricket for us. We need a squad of 16 and more.

"It's important we have competition all the time in all forms of the game."

England have already won both the Twenty20 and one-day international series in New Zealand and are favourites to win the three-match test contest.

But Bell added: "We know that it doesn't matter who you play against in Test cricket, five days of real hard work is in front of us to win any Test match against anyone in any part of the world. That's why Test cricket is so rewarding when you win.

"We are ready for that hard work. There are some world-class players in that New Zealand team and we are going to have to play some really good cricket to beat them."