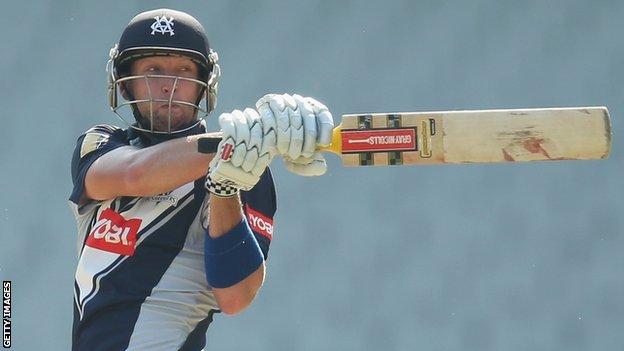 All-rounder Cameron White wants to see an upturn in Northants' FL t20 fortunes when he returns this summer.

Northants won only one game in the competition last season, with his performances a rare bright spot.

"We tried our best out on the pitch. Unfortunately, results didn't go our way," White told BBC Radio Northampton.

"It will be nice to come back. Hopefully we'll be a bit more competitive, win a few more games and push on to the finals."

White scored 228 runs in eight innings at an average of 57 in last season's competition.

And the 29-year-old has been in good form in his native Australia, hitting 144 in a recent one-day match for Victoria.

"I'm hitting the ball OK. It's nice to convert form into some runs on the board," he said.

White will follow countryman Trent Copeland at the County Ground, with the 26-year-old seamer signed up for the start of the county season.

"If there's a bit of weather around he'll be a very useful player, particularly in conditions where the ball will do a little bit.

"I think it's a very good signing and he can get a lot of dismissals caught behind the wicket."