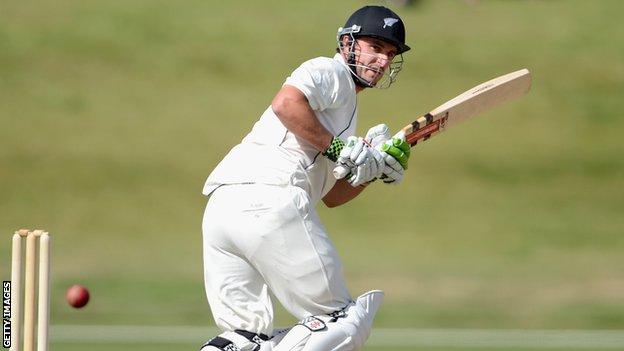 Two late wickets put England in control as a New Zealand XI reached 224-6 at the end of the second day of their warm-up match in Queenstown.

Dean Brownlie was caught down the leg side for 63 in the penultimate over of the day off Jonathan Trott before Graeme Swann trapped Jimmy Neesham lbw for a duck.

England lead by 202 runs, having been dismissed for 426 in the first innings.

Stuart Broad continued his recovery from a heel injury sustained in December as he took 1-35 from 15 overs.

"It was a good workout for us and to pick up those two wickets in the last two overs has put us in a really strong position," said Broad, who expects to be available for the first Test in Dunedin, which starts on 6 March.

"Hopefully we can knock over the last four wickets before lunch on Friday. It's a four-day game so that gives us extra time to get a result.

"The heel feels pretty good. It still needs managing but it should be fine for next week. I'm feeling good and happy with the way I bowled."

Hamish Rutherford, pressing to make his Test debut against England next month, scored 90 for the hosts, hitting 13 fours and a six from 149 balls.

The four-day match is England's only warm-up game ahead of the three-Test series.