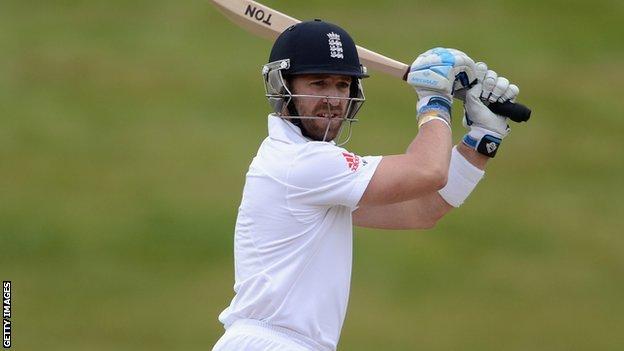 Kevin Pietersen and Nick Compton fell cheaply but England extended their lead to 333 on the third day of their tour match against a New Zealand XI.

After Compton was caught behind for one, Pietersen, who made 14 in the first innings, made eight in his final outing before the three-Test series.

The Kiwis had resumed on 224-6, but wicketkeeper BJ Watling converted his overnight 26 into a stubborn 66 as he and Anderson added 115 for the seventh wicket in fewer than 19 overs.

England, attempting to extend a first-innings advantage of 77, struggled against the new ball as Compton and Jonathan Trott became the first two of Mark Gillespie's four wickets.

Prior rallied with 11 fours in his 76-ball innings, before Ian Bell made 38 and Swann, batting at number 10, struck six fours and a six.

Prior believes Compton, Trott and Pietersen can impress in the Test series, starting with the first match which begins on Wednesday, 6 March in Dunedin.

"You can score all the runs you want in the world in warm-up games, but ultimately that first innings of the Test match is where we want Compo to go and score a big hundred," he said.

"He would want to have gone out and smashed a hundred, but he's hitting the ball brilliantly in the nets, and it will be down to him to get his preparation right going into the Test.

"The guys [Pietersen and Trott] are experienced enough and have played long enough now to know that the big test starts next week, and that's when it's important they score runs.

"They've been on tours where they haven't scored any runs in warm-up games, and then blitzed a hundred in the first Test."

Prior's fifth-wicket stand of 78 with Joe Root played a key role in helping to steady England after their shaky start.

"Obviously, it wasn't great to start off with - you don't want to lose early wickets," he added.

"Those guys at the top would love to score hundreds every time they walk out to bat, but that's not possible. In that scenario, it's up to the middle and lower order to bail the team out - and, from that point of view, it was excellent practice.

"You can net as much as you want, have middle practices among each other, but there's nothing quite like the real thing.

"We'd far prefer this from a warm-up match than guys just coming in and going through the motions."