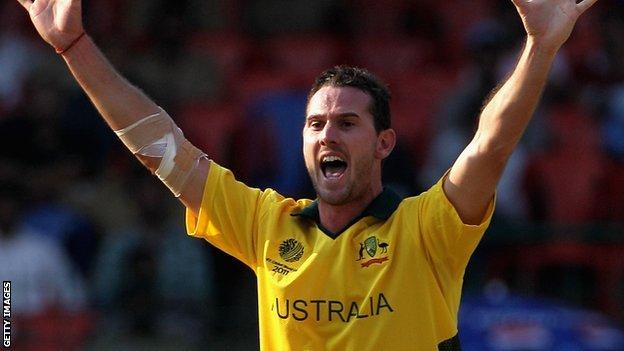 The 30-year-old right-armer, who only plays Twenty20 cricket, is renowned for his pace, having bowled the quickest recorded delivery by an Australian.

Tait spent the winter playing for Adelaide in the Big Bash and Chittagong in the Bangladesh Premier League.

He has taken 28 wickets in 19 T20 internationals at an average of 17.78 and an economy rate of 6.94, and is set to play for Rajasthan Royals in the Indian Premier League (IPL) - and for MCC in a Twenty20 tournament in Abu Dhabi - before arriving at Chelmsford.

"We welcome him to the club for the Twenty20 campaign and are hopeful of success with him in the team."

Tait, who also played three Tests before deciding his body would not withstand the rigours of five-day cricket, appeared in Glamorgan's Twenty20 campaign three years ago, taking nine wickets at a 34.70 average.

A leading member of Australia's 2007 World Cup-winning side, he opted to focus exclusively on the shorter forms of the game the following year.

However, he has experienced further injuries since then, and last appeared for Australia in March 2011, concentrating on playing in domestic Twenty20 leagues such as the IPL.

Later that year, Surrey pulled out of a deal to sign him because of concerns about an elbow problem.