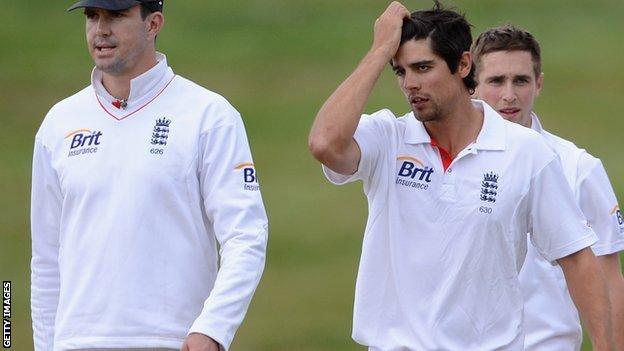 England fell to a surprise defeat in their tour match against a New Zealand XI, losing by three wickets in Queenstown.

In England's final game before the first Test, their opponents made 334-7 in their second innings to win with only eight balls to spare.

It was the first time the tourists had lost a first-class tour match since 2006.

Woakes, who took 2-67 to boost his own chances of playing in the first Test against New Zealand on 6 March, insisted there were positives to take from the match.

"We felt we had enough runs and we could bowl the team out for less than 333," Woakes told BBC Radio 5 live.

"We back ourselves to bowl a team out on the last day and unfortunately we didn't do that but we gave it our best shot.

"Our guys aren't too low as we know we played some good cricket over the past four days.

"It's good that we've had the chance to have a look at a few of their players, particularly their batsman.

"We have two warm-up days before the first Test so we can go away and think about our performance."

England, who made 426 in their first innings, declared on their overnight total of 256-9 in their second innings, to set New Zealand 334 to win.

But Watling finished with eight fours and two sixes from 122 balls in a successful run chase as England - without rested frontline seamers James Anderson and Steven Finn - paid for an unconvincing performance with the ball.

Graham Onions struggled and ended with 0-82 in the second innings, for overall match figures of 1-213.

The New Zealand XI featured 10 players with international experience with five of their team in the squad to face England again next week in the first of three Tests in the series.

Woakes made the first breakthrough as Hamish Rutherford was caught at point by Nick Compton before Broad bowled Carl Cachopa in the next over.

New Zealand then fell to 154-5 as Graeme Swann had Latham caught behind, Broad trapped Neil Broom lbw and Dean Brownlie was dismissed at second slip by Swann off the bowling of Woakes.

Root took the wickets of Anderson and Jimmy Neesham but Watling, who had been dropped by Swann when on 47, guided New Zealand XI to victory.

New Zealand XI won with only an over and two balls to spare as England lost a first-class tour match for the first time since an eight-wicket defeat against an India Board President's XI in February 2006.