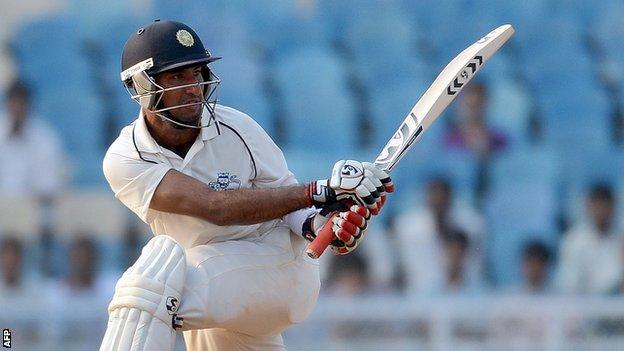 India remain in control of the second Test against Australia, despite a tail-end collapse on day three in Hyderabad.

Cheteshwar Pujara top-scored, his fine innings ending on 204 when his hook was caught by Xavier Doherty.

But India lost their last five wickets for only 19 runs to end their first innings on 503 - a lead of 266 runs.

Australia began steadily, scoring 56 without loss, before the quick wickets of David Warner and Phil Hughes left them 74-2, 192 runs behind.

The loss of Warner and Hughes, both as a result of mistimed sweep shots, proved another setback for Australia at a moment when they appeared to be slowly edging their way into the match.

India began day three with a healthy lead of 74 with nine wickets in hand, and the partnership of Pujara and Murali Vijay looking impressive.

That continued as the duo went to work with the bat quickly, with the spinners of Australia routinely knocked beyond the boundary.

But the spin finally worked for the tourists when Glenn Maxwell caused Vijay to edge behind to Ed Cowan at leg slip on 167.

There had been 110 overs between India's first and second wicket, but it only took three overs for the next to fall as Pujara was finally removed after failing to keep down James Patterson's bouncer.

Though Sachin Tendulkar worked the Hyderabad crowd into a frenzy upon his arrival, he could only score seven runs from 32 balls, caught behind after a leg-side delivery.

Mahendra Dhoni and Virat Kohli helped steady the batting once more with a partnership of 56, but Australia's spinners then took charge.

With India on 484-8, Maxwell and Doherty went to work, removing Ravindra Jadeja, Ravichandran Ashwin and Harbhajan Singh within three overs for only five runs. Kohli went soon after for 34, while a brave 10 from Bhuvneshwar Kumar did little to halt the slide.

Australia's opening pair of Cowan and Warner sensed the slightest chance to capitalise and began to build their second innings smartly, until all sense deserted Warner with 56 on the board.

He attempted a sweep off Ashwin's spin bowling, but missed the ball which in turn went through to hit the leg stump.

There had been no further scoring when Australia gave Ashwin his second wicket of the day, with Hughes missing the sweep before the ball struck him on the glove and rolled back on to the stumps.

Australia resisted further damage, digging in to end the day with Cowan and Shane Watson unbeaten on 26 and nine respectively.