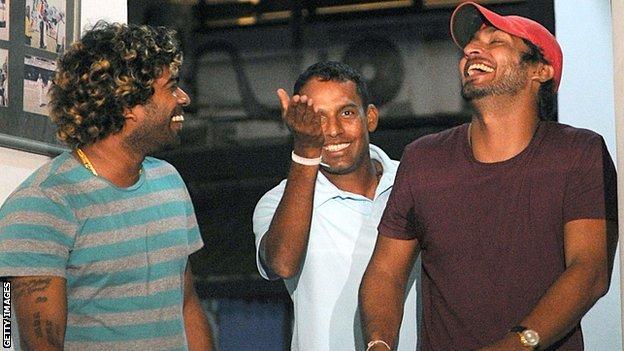 Sri Lanka have named their strongest available squad for the first Test against Bangladesh after a dispute between 23 centrally contracted players and the Sri Lanka Cricket (SLC) board.

SLC said the players wanted a higher share of the board's revenues and had threatened to select a reserve team.

But 22 of the 23 players have now signed their central contracts.

The only player who has not signed is ex-captain Mahela Jayawardene who is abroad and misses the Test with injury.

A SLC statement read: "At this meeting the players requested the reinstatement of the guarantee fee component which was taken off by SLC this year. (The guarantee fee is a payment made by the ICC to member nations for participation in ICC events). Earlier players were allocated of 25% of the fee paid to SLC.

"The players requested the fee to be paid to them where they would reallocate the funds received via the guarantee fee towards cricket development in the country. SLC rejected the proposal as it was felt cricket development activities should be vested with the governing body rather than with the players.

"The amounts allocated to the 23 national players from the current contracts amounts to 67% of the 2013 revenue generated by SLC. If SLC agreed to grant the players' request to include the guarantee fee, SLC will have to bear 81% of its annual revenue towards the 23 cricketers.

"On 4 March, all cricketers who were offered contracts (with the exception of Mahela Jayawardene who is currently overseas) signed the same showing the players' solidarity towards SLC."

The first Test begins in Galle on Friday, with the two-Test series followed by three one-day internationals and a Twenty20 international.