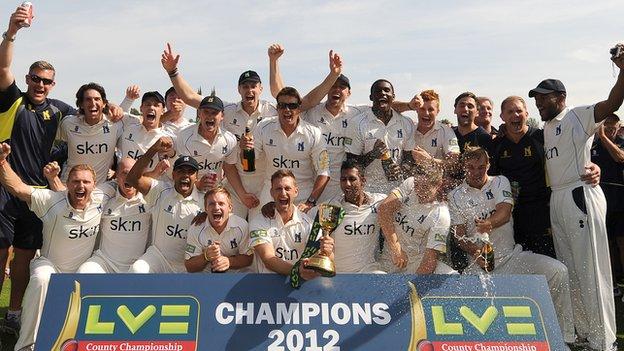 County champions Warwickshire have lined up two young batsmen to further bolster the squad for the 2013 season.

Scot Freddie Coleman, 21, and Australian Sam Hain, 17, have joined the Bears' first team squad who travel this week to Barbados for pre-season.

Coleman's signing is expected to be confirmed by the end of the week.

But the Bears may have to wait until just before the start of the season in April before they can confirm that Hain will take up a place within the squad.

Both promising batsmen come from within Warwickshire's own ranks at Edgbaston.

Hain, who was born in Hong Kong but educated in Queensland, has represented Australia at Under-19 level and made his Warwickshire Second XI debut as a 15-year-old against Derbyshire at Walmley in July 2010.

Warwickshire academy product Coleman will link up with the county for the second half of the season once his Oxford Brooks University commitments are completed.

He made his debut for Scotland, who awarded him an incremental contract this winter, as a 17-year-old schoolboy in a CB40 match against Nottinghamshire in 2010.

Warwickshire's only other signing so far this winter has been Yorkshire seamer Oliver Hannon-Dalby.