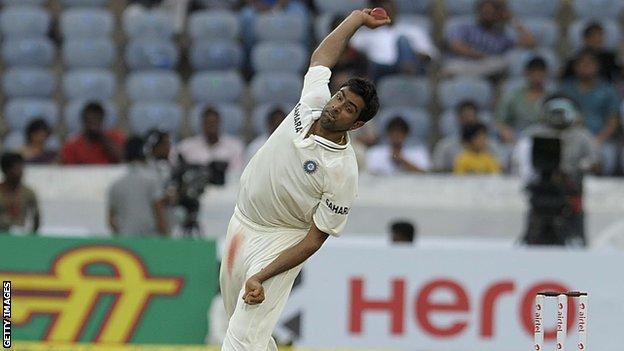 India beat Australia by an innings and 135 runs in the second Test in Hyderabad to take a 2-0 lead in the four-match series.

Australia became the first team in Test history to declare in their first innings and then lose by an innings.

We have had guys get in and out without making big scores. That's unacceptable at this level

Off-spinner Ravichandran Ashwin led the way with 5-63 as India cruised to victory with a day to spare.

Following their eight-wicket win in the first Test in Chennai, Mahendra Dhoni's side are now in control of the series with two Tests remaining, while Dhoni has overtaken Sourav Ganguly as India's most successful Test skipper with 22 wins.

Australia held out hope for a draw on the start of day four, but they had only added one more run when Shane Watson was caught by Dhoni off the bowling of Ishant Sharma.

With Ashwin cutting through the tail with ease, Australia were only able to add a further 20 runs and were bowled out by lunch, with more than a day and a half remaining.

The home side's win was built on the 370-run partnership of Cheteshwar Pujara and Murali Vijay on the second and third days.

Dhoni said: "It was important to start play really well, and Ishant gave us the important breakthrough. I think I have got a very good side.

Most Test wins as India captain

"We often talk about long partnerships. If you get 40-50, you have to score big. That's what Pujara and Vijay did. That resulted in a massive partnership, which gave us the freedom to accelerate."

Clarke was angry with his team's performance and said: "They outplayed us in every facet of the game. There is no doubt we have a lot of work to do in all facets of the game and there will be no stone left unturned.

"There will be a lot of hard work, I can assure you. You don't get better sitting on the couch. We have had guys get in and out without making big scores. That's unacceptable at this level."

The third Test begins in Mohali on Thursday 14 March.